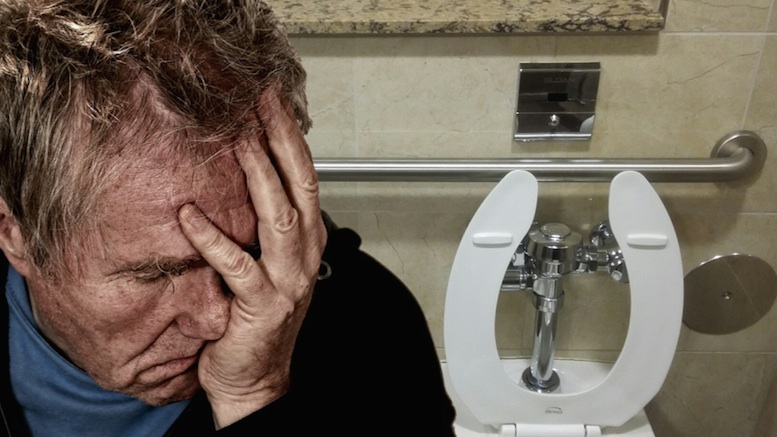 Ray Zonas is a man with a unique perspective on the modern world, as he recently woke up from a 30 year coma. He was soon asking for ice cream, and, in another important milestone, was also going to the bathroom by himself.

It was there that he was terribly startled when the autoflush mechanism engaged while he was still sitting on the toilet. It had to be explained to him that rocking back and forth, as he liked to do, makes the sensor think you’re getting up and that’s why it flushed.

“Oh yeah? Back in the 1980s we liked to be able to move about a little if things needed some encouragement to get going. I didn’t realize that basic human anatomy changes on a 30 year timescale.”

A WTAE local news crew arrived to get Ray’s take on life in 2015 for broadcast that evening. They were confused when they asked him what he thought of the Internet age and his response didn’t seem to make any sense.

“Have the people who designed these auto flushing facilities ever taken a shit? Seriously. That is a 100% serious question. Because I don’t think they have.”

Action News 4 field reporter Ashlie Hardway’s enthusiasm for the segment quickly waned as it became clear that Ray was only interested in discussing one particular way in which the world had changed since 1985. He was now even angrier, having just realized that, even when the auto flusher mechanism works as intended, it would still flush far too early.

“It flushes as soon as I get up, so now I’m forced to sit down again just to make it flush the paper when I’m done wiping? Fucks sake!”

The situation threatened to turn violent when the camera operator suggested to Ray that if the commode didn’t have a manual lever, he could always wave his hand in front of the sensor to force it to flush.

“You damn well know waving a hand doesn’t work half the time. Just like with those useless freaking automatic faucets. Isn’t anyone else who was alive when Reagan was president missing having these things work properly?”

The attending nurse interrupted them to tell Ray that his son – who he had last seen as a toddler and who now lives as a father of four in New Zealand – had arrived. But Ray barely seemed to notice, being more interested in forcing the news crew to tape his direct address to the world.

“My brain has been asleep for over a quarter century but it still took me no time at all to conclude that this technology is a terrible idea. What is wrong with all of you? Do you actually WANT taking a dump to be even harder work than it already is?”

His ranting finally came to an end when a UPMC physician snuck up behind him and administered a sedative. The medical staff were issued instructions that, should Ray regain consciousness, he is on no account to be told that Apple products no longer have arrow keys.