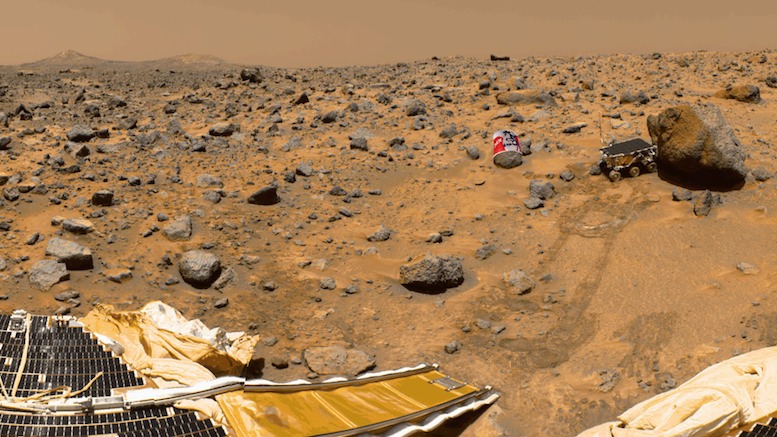 Mission control for the Mars Rover mission had to do a double-take this week as an image was beamed back that showed what looked like a bucket of Kentucky Fried Chicken on the planet’s surface.

“Is that Colonel Sanders or am I high right now?”

Further image analysis confirmed that is was. The bucket is upturned and partially covering a medium sized rock. It is unknown if there are any biscuits or tasty deep fried chicken inside.

“Needless to say this has come as quite a surprise.”

This is not, however, the first time that an extra-terrestrial discovery of fast food packaging has perplexed NASA. During the Apollo 11 mission, Buzz Aldrin noticed something reflective during a moonwalk and found a McDonalds wrapper partially covered with lunar dust.

“Looks like it came from a double-cheeseburger. Eagle out.”

The story was put out that Neil Armstrong had placed it there when Aldrin wasn’t looking as a prank. But the famously taciturn first-man-on-the-moon never confirmed nor denied it before his death in 2012.

“There were always rumors of a cover up.”

Explanations have varied from Soviet plots to drive Americans insane to the notion that we are a part of a giant alien experiment. People who know their explorer history will also remember how puzzled Scott of the Antarctic was to find a tin of McCall’s Paysandu Ox Tongues seemingly waiting for him at the South Pole. But business analyst Chuck Barrow doesn’t see a mystery at all.

“Look, the fast food industry is a highly aggressive business. You have to penetrate new markets constantly and penetrate them early. None of this surprises me in the least.”

The Wall Street consensus is that this is simply capitalism working at its best, with fast food companies doing whatever it takes to be there first to provide low-cost calorie-rich junk food to interplanetary travelers. So what will this mean for the members of the one-way Mars One mission when they get there?

“They’ll probably find a Taco Bell waiting for them staffed by someone in a spacesuit earning minimum wage.”