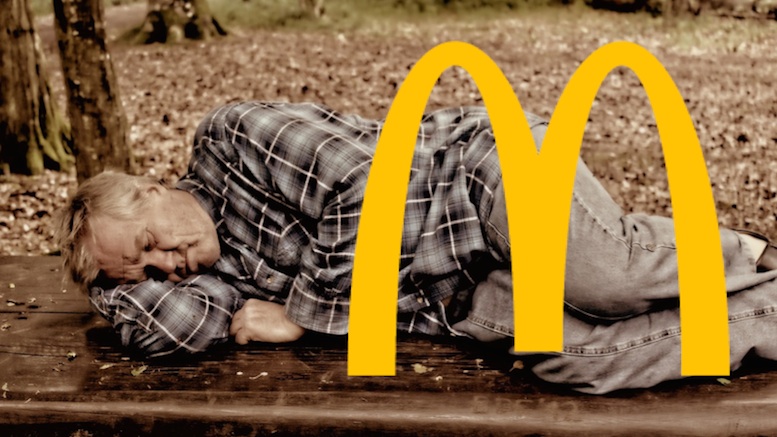 Sleeping rough is one of the many ways to live on a McDonalds wage.

[Oakbrook, IL] In response to the recent push to raise their hourly wage to $15, fast food purveyor McDonalds [NYSE:MCD] has released a new set of guidelines on how to get by on their current wages.

“The last time we published a guide like this – which included working a second job – we were ridiculed as it only made clear the extent to which we didn’t pay a living wage. But nobody likes to be laughed at, not even Ronald McDonald. So he’s thought up some ways you really can live on a McDonalds wage without working a full second job. Want a McDonalds living wage? You already have it as long as you do one of these four things.”

One surefire way to get by on a McDonalds wage is to be born with a silver spoon in your mouth and only be working a fast food job because it satisfies some weird fantasy you have to hobnob with the real people. After you get your first paycheck and look at the payroll taxes etc, you may think there’s been a mistake as the billions you are making off your investments without lifting a finger are effectively taxed less that the pittance you earn working the fryer. Do not be concerned as this is not an error.

2. Work for McDonalds – in Denmark!

Why not work for McDonalds in any number of developed countries that aren’t the United States, because you’re only getting truly screwed if you work for an American McDonalds. Try on a Danish McDonalds living wage for size – a whopping $20 an hour! You may think that’s unfair and we couldn’t agree more. That’s why we want all those snooty Social Democratic countries to become corporate oligarchies like the United States just as much as you do.

A lot of these so-called ‘costs of living’ are just things like owning or renting a home and paying for electricity and water. So one easy way to reduce your need for money is to go without all those luxuries and commune with nature. Then all you need to worry about is food and hello! – you already work at a McDonalds, so you can buy it from us. If you need to shower etc. a good trick is to sneak into a Super 8 motel while the rooms are being cleaned. We don’t need to know how you live as long as you’ll work at or near minimum wage. But don’t turn up late or unwashed or we’ll dock your pay!

***warning: this may led to death by freezing in many parts of the country.

Use the time in our store to think up some ways to get money quickly to supplement your income without have to take on another proper job. You could come up with a great idea for a viral video, or, if you’re criminally minded, think of something to steal and sell for cash. We can’t know the innermost thoughts that are going through your head while you’re working for us, though if we could we would certainly find a way to exploit that too.