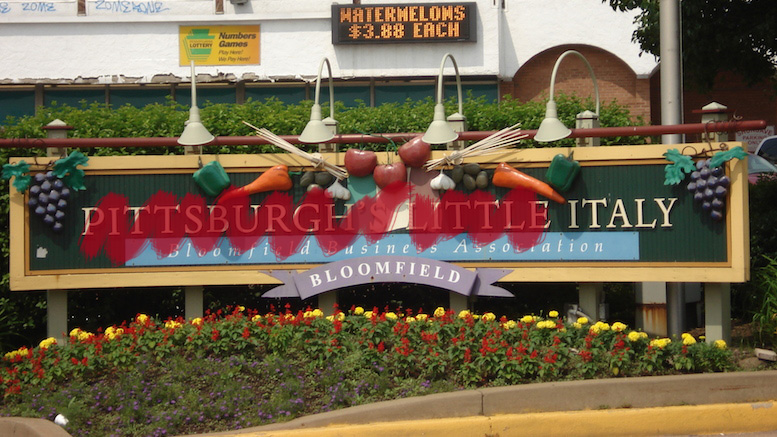 A Mercer County man is in the doghouse with his local community after it became apparent that his ailing mother’s stories of traveling the globe with him actually described a visit to Pittsburgh, some 70 miles away.  He had promised he would take her to see the world before she died, but then calculated that her lifetime savings would barely cover the high cost of the trip. Determined not to let the woman who gave him life down, and equally determined to preserve his inheritance, he decided to give her the trip of a lifetime by taking her to Pittsburgh and using it as a stand-in for multiples countries spanning three continents.

“It’s not called the city of neighborhoods for nothing!”

He was aided in this by her fear of flying, which meant she was only too happy to take sleeping pills and valium well in advance of boarding an airplane.  He decided to start out with the easiest country first, so after a drive to the Pittsburgh International airport followed by a medicated snooze in the cell phone parking lot, they were on their way through the Fort Pitt tunnels and soon strolling the streets of Bloomfield.

“She enjoyed our trip to ‘Italy’ very much, though she was slightly disappointed to learn that Venice was flooded and therefore closed to tourists. We ate in McDonalds a lot to save money, which was easy to explain away as they’re all over the world.”

What was less easy to explain away was the presence of a Giant Eagle store in South Africa, though he eventually got her to accept that she must have imagined it, just like she did with the ShurSave in Rome. He admits to feeling some guilt over exploiting her extremely sheltered rural upbringing when misrepresenting Beltzhoover and Larimar as Cape Town and Johannesburg, respectively, with a Safari trip to Highland Park in between.

He had hoped that would be enough but she reminded him that he promised Ireland would be on the itinerary.  That seemed too difficult to pull off until he realized that trips to Ireland largely consist of visits to pubs around the country. After yet another spell in the cell phone parking lot they were on their way.  When she remarked that all the airports and cities looked the same, he assured her that this was because the rest of the world had all used the same group of  architects to rebuild after the devastation of WWII.

The driving tour of Ireland consisted of looping the Yellow Belt with excursions into Dublin (Riley’s Pour House in Carnegie), Cork (Mullaney’s Harp & Fiddle in the Strip District), Galway (Claddagh in the Southside Works), and, demonstrating his pitiful level of research, Glasgow (Pipers Pub on Carson Street), even though that city is not in Ireland nor reachable from there by car alone. Fortunately his error was not realized. She also wanted to visit the Cliffs of Moher, but he explained they were unfortunately closed for repairs, and, anyway, they had an early plane to catch to Munich, Germany (Deutschtown on the Northside).

Once they got into a rhythm he was able to add an impressive number of countries to the list, including Ukraine (McKees Rocks), Israel (Squirrel Hill), Croatia (Millvale), Russia (Greenfield), Slovakia (Munhall), Hungary (Hazelwood), China (CMU campus), and India (Sri Venkateswara Temple in Penn Hills and the Taj Mahal restaurant on McKnight Road). Unfortunately for the cheapskate son, the successful trip only increased her desire to see the entire globe before her demise, which no longer appears to be quite so imminent.

“She’s determined to go to Central and South America now, but Hispanics & Latinos only account for around 2% of Pittsburgh’s population, so I guess I’ll just have to bite the bullet and take her to Hartford, Connecticut.”

He insists he has the best of intentions, and recently took a demented uncle on a no-expense-spared globetrekking cultural expedition, otherwise known as a tour of the Nationality Rooms in the Cathedral Of Learning building in Oakland.