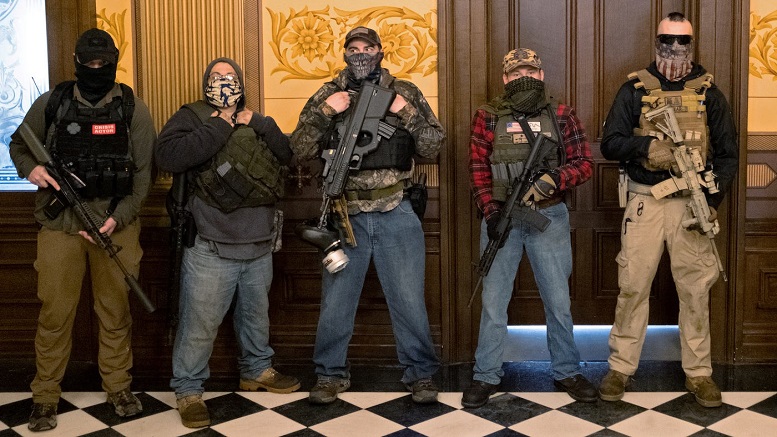 (Lansing, MI) Protesters openly displaying weapons have taken to the Michigan State Capitol Building to demand their concerns be heard and acceeded to, including ending the shutdown to allow them to compensate freely in public view. Criticising Governor Gretchen Whitmer, they said they would not allow anyone to deny their God-given right to openly carry large firearms to make up for the small arms in their pants.

“How are we supposed to compensate for our tiny penises if we cannot parade around with our big guns and oversized magazines?”

Whitmer said they were still free to post deeply sad pictures on social media where they pose with their high-calibre rifles and jacked-up pickups to allay their deep-seated feelings of inadequacy. However the assembled men-children insisted this was not enough to help them mask their unacknowledged shame as failed human beings who never amounted to anything.

“George Washington did not found this great nation for men like us to be denied the freedom to make fools of ourselves in an attempt to forget that we don’t measure up where it counts, or indeed anywhere.”

The Michigan Governor held fast, however, and extended the stay-at-home order over the objections of the small-membered men and their colleagues in the Republican party.

“I’m sorry, fellas, but you’ll just have to find other ways to cope with the mini-weiners between your legs until this pandemic is under control.”