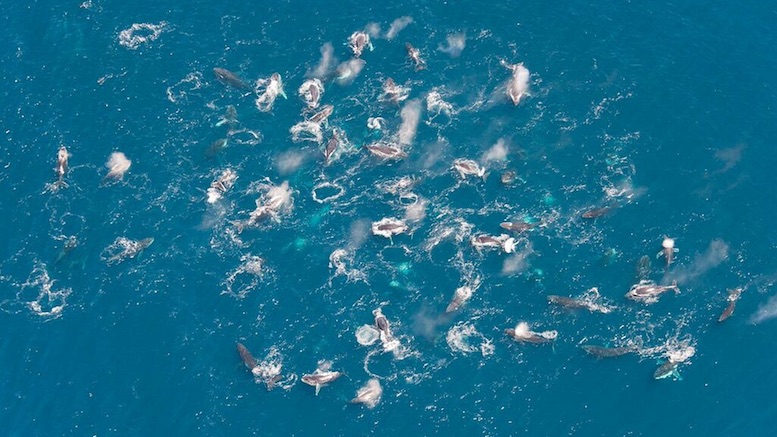 Scientists have been alarmed recently by atypical large formations of humpback whales, which is considered highly unusual behavior for this solitary mammal. Theories put forth for the increasingly common occurrences range from climate change to the effects of military sonar.

The true explanation was finally revealed today when it was reported that the enormous mammals are hold anti-Trump demonstrations. Though there were rallies protesting President Trump across the world following his inauguration, this is believed to be the first truly oceanic movement protesting the Reality TV Star turned Commander in Chief.

The discovery was made after high resolution photography revealed sign with slogans including “Not My President” and “I May Blow But Trump Blows More”. Though the protests are primarily focused on the administration’s anti-immigrant policies, the whales also expressed support for the Standing Rock Sioux Tribe‎ protesting the Dakota access pipeline, and said they were there in spirit even if it was far inland for them to appear in person.

President Trump quickly hit back via twitter, saying a shark rally supporting him off the coast of Florida was much bigger, though it believed that the sharks in attendance were primarily attracted by the warm coastal waters and abundant fish, and are not politically motivated.