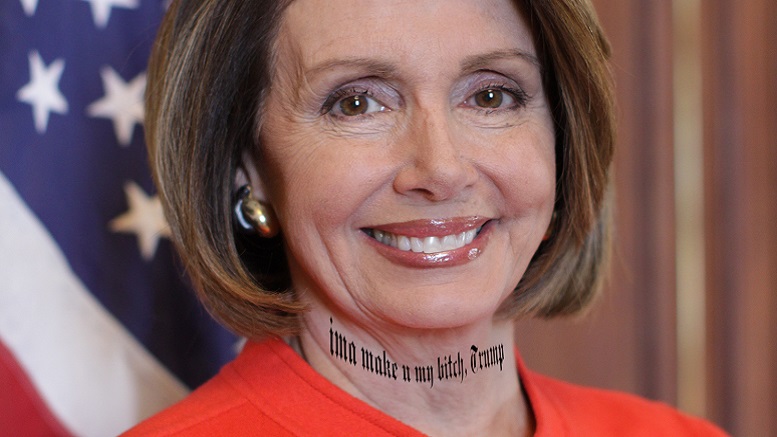 With their feud continuing to escalate, House speaker Nancy Pelosi made it clear today how much she intends to dominate the President when she revealed her new neck tattoo which reads “ima make u my bitch, Trump”.

It was initially thought to be a prank using removable marker, however the East Capitol parlor that performed the work confirmed that it was a permanent tattoo using the finest European metallic ink.

“I warned her it would sting and she said ‘good’. That’s one badass speaker right there.”

Pelosi said she thought long and hard about what she wanted it to say.

“Impeach the mother has a since ring to it because of course that would make no sense since that’s done and done!”

This is believed to be the first time tattoos have been used in a political feud since Howard Taft got an arm tattoo that read “these fat rolls don’t rollover” together with an anchor and snake.

Feeling under pressure to keep up, Chuck Schumer revealed that he got a modest “kiss this, Trump” which he declined to show reporters out of modesty.

“Just think about it.”

3 Comments on "Nancy Pelosi Gets “ima make u my bitch, Trump” Neck Tattoo"