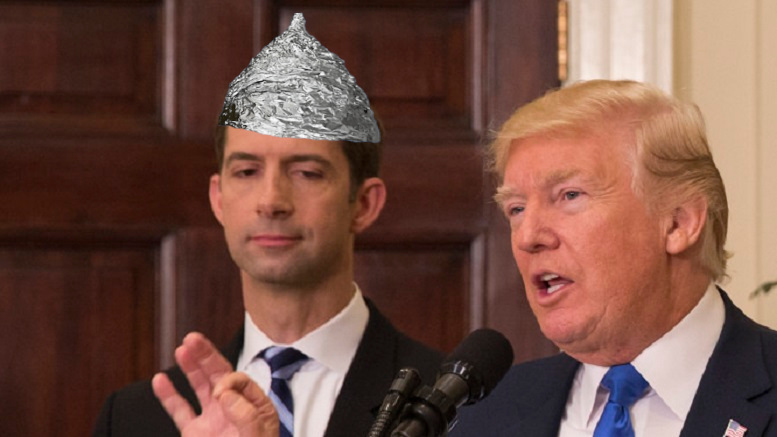 Leading conspiracy theorists took to the nation’s airwaves and the unproven ether today to make clear that they had nothing to do with Senator Tom Cotton and his whack-a-doodle notions about the origins of the novel coronavirus.

“He’s fucking nuts, that one!”

Proponents of the theory that the Apollo moon landings were faked took pains to emphasize that they do not endorse the Congressman’s madcap theories. Worst of all, they say his reckless half-baked ideas could do real harm.

“This is a dangerous distraction when we should be social distancing, whereas the worst that can result from saying the moon landings didn’t happen is a right hook from Buzz Aldrin.”

Kooks and eccentrics of all stripes want the rest of the public to know Tom Cotton is not one of them.

“Don’t let this tinfoil hat – that I’m only wearing to block the mind control waves emanating from Area 51 – fool you into thinking I agree with anything Tom Cotton says. I may be insane but I’m not that insane.”

But there is one mystery that still perplexes them – who is voting Tom Cottons into office.

“It’s aliens, right? It’s got to be aliens, who are already living among us by the way.”

Be the first to comment on "Nation’s Conspiracy Theorists Distance Themselves From Tom Cotton: “What a nutcase!”"