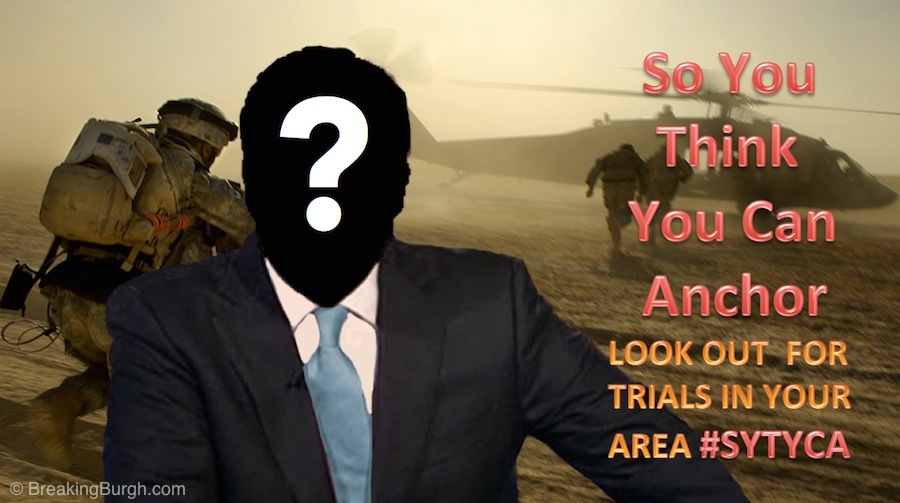 Must be able to not make shit up.

Following in the wake of the Brian Williams suspension, NBC has announced that the next permanent anchor of the Nightly News will be the winner of its latest reality show “So You Think You Can Anchor”.

NBC executives stressed that this development in no way meant Williams could not return to his old position.

“Brian is certainly free to register as a contestant on #SYTYCA, as is Lester Holt.”

Questions quickly followed as to who would be fit to judge this contest to fill the spot that was once occupied by the likes of Tom Brokaw and John Chancellor.

“Naturally we only want the best people making informed decisions, which is why we are relying heavily on the original team that made ‘The Voice’ such a success.”

“You have to grab the audience, not by singing but just by speaking, and not by belting out catchy lyrics but by reading dry prose about the crappy things going on in the world, and if you have a great rack you barely get to show it off. It’s a tough gig, no question.”

In a surprise twist Tom Brokaw will return to NBC as the villain of the judges’ table, and has even committed to go tieless and wear aviator sunglasses just like Simon Cowell.

“We’re expecting Tom to take one look at most of these aspiring news presenters and to promptly rip them a new one. He’s a man who doesn’t suffer fools, and we expect most of the entrants to be just that. Like with any reality show.”

NBC anticipates that all the contestants, with one exception if Williams enters, will already know that telling fibs on the news is bad. So instead they’ll be looking to see who’s best at telling harrowing personal war stories that are actually true. They suspect the challenge will be harder than it sounds.

“You don’t get to cry PTSD when you’re presenting the nightly news.”

Contestants who are not veterans with their own verifiable war stories will be dropped into active fire zones in the Middle East, from where they will make their way back to 30 Rockefeller Center to report on what they saw and experienced.

“Assuming they haven’t been captured by ISIS, obviously.”

Other challenges will include trying to make the wannabe anchors laugh when reporting gravely serious stories.

“They will have to read a lengthy report about rape culture with appropriate gravitas, while the entire SNL cast does Cosby impressions in front of them.”

Viewers will also be able to participate and influence the outcome though online and text voting.

“This is where we expect Brian will have an advantage. Yes, he makes shit up, which isn’t ideal when you’re supposed to be America’s most trusted source for news. But he also ‘slow jams’ it very well. Lester not so much, though he does emanate a cool ‘Don’t fuck with me’ vibe, which some fans may go for.”

Open Call Auditions for #SYTYCA will begin soon.  To audition you must be legally present in the United States, be 15 years of age or older, and be able to lean forward in a prepossessing manner whilst seated at a desk.