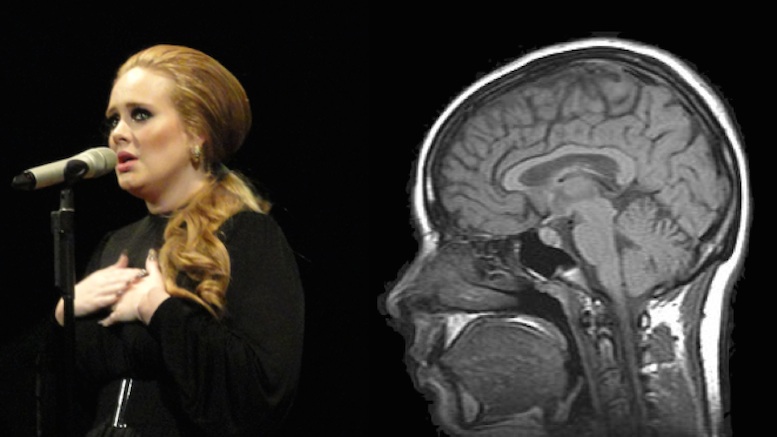 A group of the nation’s top neurologists have issued a warning that excessive listening to music by British songstress Adele can be hazardous to your mental health. This follows neurology departments reporting being flooded with cases of people exhibiting significant trauma in brain regions known for emotional processing.

“When it comes to the effect on the brain, the typical Adele song is like heroin, speed, crack and alcohol all rolled into one. Simply put, we are not designed to withstand soulful power ballads this intense.”

Unfortunately, they expect to see many more cases in the future. They highlight the case of ‘Jeff’ (not his real name), who was admitted to Johns Hopkins after family members became concerned that he was not his real empathetic self anymore.

“The CT scan revealed the entire limbic system was basically scar tissue as a result of listening to ‘Hello’ nonstop for three days.”

They recommend that Adele music come with a warning label to advise listeners of the dangers of her trademark style that causes listeners to well with emotion far in excess of normal limits.

“People like Jeff are sadly destined to live out their lives with no emotional capacity as the neurons involved have been burned out. They do retain their critical faculties located in the prefrontal cortex, which means they are now prone to view Adele’s music cynically and even to mock it. This puts them at grave risk, primarily from Adele fans.”

For those whose cases are not as advanced as Jeff’s, it is still possible for the brain to recover, due to its extraordinary plasticity and ability to cope with deeply stressful situations. But those wishing to avoid long-term damage are not advised to go cold turkey.

“As a practical matter it’s not possible to avoid Adele entirely even if we thought that was a good idea from a medical perspective.”

They recommend gradually devoting more and more of your listening time first to Morrissey (which works similar to methadone), and then work your way down to impotent vapid music that has no emotional weight behind it whatsoever.

“Taylor Swift, in other words.”