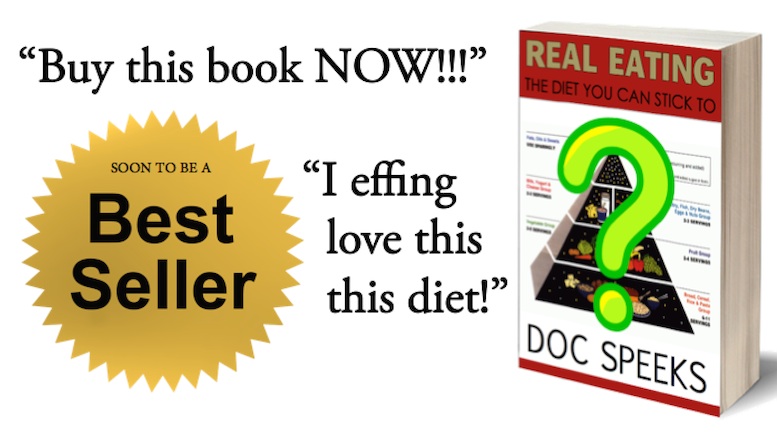 A new diet is about to sweep the country and this one promises not to be a passing fad, mainly because most Americans are already following it.

Called ‘Real Eating’ by self-taught nutritionist Doc Speeks (who for legal reasons wishes to state that ‘Doc’ is a nickname), it’s all about having a plan for the long haul.

“I wanted to come up with a diet that people can stick to.”

The problem with most diets, Speeks explains, is that they are hard. Not so with Real Eating, according to this graduate of multiple motivational courses.

“Don’t even think of this as a diet, but as a way to eat for the rest of your life.”

Speeks claims his diet is so easy to follow that many Americans are basically following it already without even realizing it, though he strongly suggests that they still buy his book.

“Even if you find you’re already doing what the diet recommends, it’s nice to be reassured that you are on the right path.”

Enthusiasts say Real Eating has many elements in common with other well-known diets, but there are subtle differences that distinguish it from the rest.

“All the diets I’ve tried have guilt-free unlimited foods like raw carrot sticks and water, but Real Eating extends that to include chocolate and cheez-its, which makes all the difference!”

Speeks’s diet makes use of a food pyramid, but unlike more unrealistic prescriptions, his is left blank so you can fill in the foods you want to eat.

“Maybe you want a broad base of grain and starches, or maybe you want to fill your food pyramid with Arbys and Taco Bell. My diet recognizes that everyone’s pyramid is different.”

As with any diet the key is moderation, he says, unless you still feel like eating, in which case you should definitely wolf down that second Big Mac.

“Otherwise you might get fixated on it later, which is a certain path to dietary failure.”

His other criticism of most diets is that they make deceiving claims about how much weight you will lose and how rapidly.

“I’m not going to promise that you’ll lose 10 pounds a week on my diet. Let’s just say your weight may change, and leave it at that.”