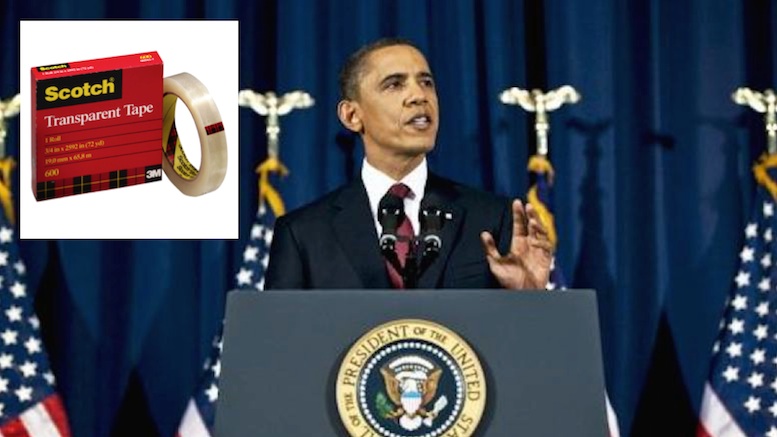 [Washington, DC] With less than a year to go in office, Barack Obama is already looking to how the future will regard his legacy as President. Though he will already be remembered for significant achievements in the areas of healthcare, the economy and foreign policy, he still feels he did not achieve that knockout home-run which impacts the lives of all Americans in ways they can appreciate each and every day. Therefore he plans to use his remaining time to focus on high-risk/high-reward initiatives that, if successful, are likely to ensure his name will still resonate centuries from now.

“I want to improve the lives of all Americans in ways they can tangibly appreciate – starting with the enormous problem of how to find the end of the scotch tape.”

In a tale that resonated with Americans of all color, creed, and political stripe, Obama regaled a crowd at the Willard Hotel about the time he had to wrap a present for Michelle and lucked out with a new roll of scotch tape where the end was easily discernible due to the obvious red-tartan tab.

“My dream is to make every use of the scotch tape as easy as that first use.”

The crowd leapt to applaud him, but Obama was not near done, insisting that making tape less frustrating to use is only the beginning of an ambitious program to improve our lives by making them less full of minor annoyances.

“As I speak to you now, my trusty Vice President Joe Biden is meeting with our greatest scientific minds to determine a way to make discarded chewing gum not stick to the soles of shoes, whilst not giving up any of the properties that have made it so popular with so many for so long, from our brave GIs during WW2, to the internet generation of today.”

Though hugely popular with everyone who hears it, some analysts think Obama’s new program may be too ambitious, given that he also plans to eradicate the inconvenience of mislaying keys, losing the remote between the couch cushions, and the agony of finding toast crumbs in the butter tub.