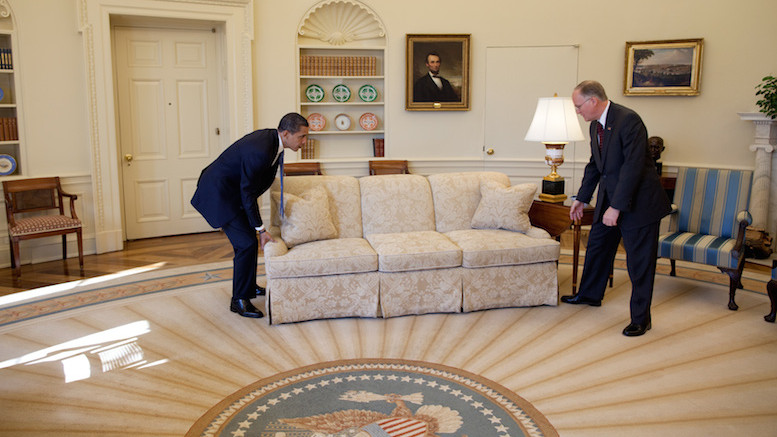 A businesslike President Obama is reportedly spending his last days at 1600 Pennsylvania Avenue saying goodbye to his staff and childproofing the White House in preparation for its new occupant.

“The worry with small children and Donald Trump is that their developing brains don’t yet have the capacity for exercising judgment – making them prone to saying the first thing that pops into their head and swallowing anything they can get their little hands on.”

That’s why Obama says it’s so very important to ensure all cabinets within their reach have child-lock mechanisms, so they don’t get hold of potentially dangerous household cleaners or nuclear launch codes.

“I already have the lower cabinets done from when Sasha was little, but Donald’s over 6 feet tall, so I must remember to do the upper ones as well.”

Together with the assistance of the secret service and visiting dignitaries, Obama has moved all the furniture against the walls so Trump will have plenty of room to roll around on the floor every time he has a tantrum. He’s also installing safety gates on all the entrances to the Oval Office.

“I’m not saying he can never go in there, but only under proper supervision when he’s calm, and after he’s promised not to touch anything.”

He admits it’s a lot of work, given that he doesn’t expect a Trump Presidency to last very long, but it has to be done for safety’s sake.

“Just like with all young children, Donald will find that the novelty of something new wears off pretty quickly. I fully expect that he will resign after a few days, and turn his attention elsewhere.”