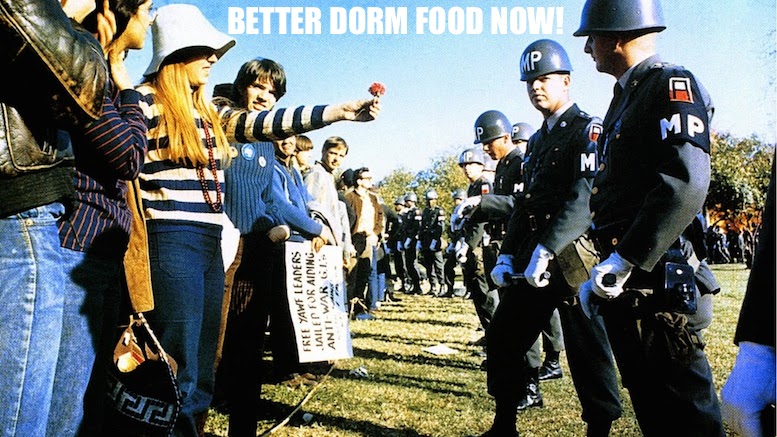 We will not be moved - until we get hungry.

[Oberlin, OH] When most people think of student protests, what often comes to mind is opposition to the Vietnam War and fighting to end segregation and the oppression of women, of which Oberlin College has a proud history. Less likely to come to mind are complaints that the rice in the college cafeteria is undercooked and that the ethnically inspired offerings are insufficiently authentic, but that is what the students at Oberlin have embraced as their own personal Stonewall.

Smaller minds might argue that someone looking to experience the genuine wonders of true Japanese sushi and proper Vietnamese cuisine will not expect to find it in a college dorm cafeteria catered by a company that calls itself Bon Appétit Food Management, yet is based out of Palo Alto, California. But the enlightened students at Oberlin College know that once you allow subpar General Tso’s chicken to gain a foothold, human rights soon cease to exist.

Because of the haunting memories connected with nearby Kent State university – as well as the mind-numbingly low stakes involved – it is unlikely that authorities will try to suppress any resulting large-scale demonstrations with force. Legendary protest campus, Berkeley, is unlikely to get involved as students there are quite happy with their cafeterias which serve a variety of tasty bean salads, and because they prefer to reserve their anger for an issue with slightly more gravitas, such as any other issue.