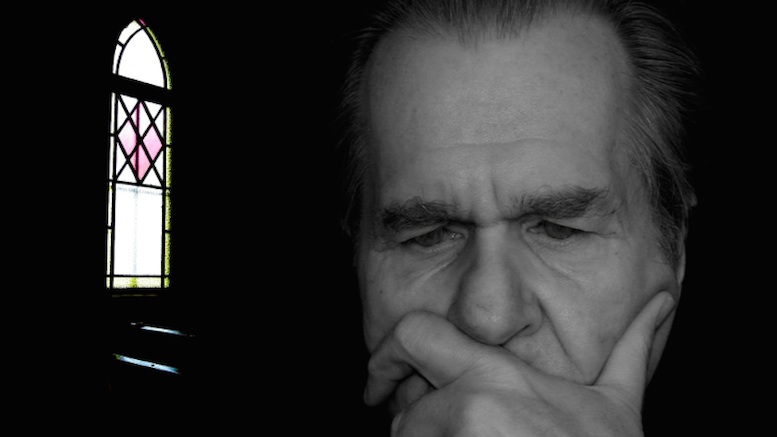 It has been a tragic year for small-town Ohio resident Wilbur Down. He lost his job, one foot, and the one place that gave him solace. His local church, which he donated his life savings to help build, was heartbreakingly burned to the ground. Such a string of bad luck would have broken most people, but not Wilbur, who gains his strength from his firm Christian faith. However Wilbur has recently started to question his formally resolute belief.

“I always assumed allowing myself to get totally shafted here on Earth meant I would get some form of redress in the afterlife. Now I’m starting to wonder.”

When he learned the local pastor had taken the insurance money and built a new ‘church’ in a private wooded area across the state complete with outdoor hot-tub and five bedrooms but no chapel, he started to have some nagging doubts about his Creator’s purpose. He almost got in touch with a local news station to ask them to investigate whether it was, as rumored, a holiday home. But the new pastor in his small Ohio town stayed his hand.

“He told me not to question His methods as the Lord works in mysterious ways. Fortunately he’s started a new fund to rebuild, which I’m reverse mortgaging my house to contribute to.”

When Wilbur then received a severe injury at work that crushed his left foot, he agitated for better safety practices, especially since the business had previously refused to listen to workers’ concerns and had ruthlessly punished all attempts to unionize. But his friends in the community convinced him the factory owner was a good Christian man and that this was obviously a gift from Above.

“We’ll probably live our whole lives never truly knowing the joy of having two feet because the Almighty never blessed us by taking one away.”

Wilbur thanked his friends for their helpful advice, but then asked himself what exactly was helpful about it. It also occurred to him that it always seemed to be people who were richer or better positioned in society than he was who were urging him not to speak up or interfere with Divine Provenance by doing things like contacting lawyers.

“What if there is a God, but one who’s more ‘hands off’ and expects people to get angry about all the crappy things that happen to them and do something about it instead of resigning themselves out of a sense of religious obligation?”

Consequently, Wilbur has decided to assume that God is only taking care of the really big stuff and that his problems are the result of other people selfishly looking out for their own interests.

“Because if it is His plan, it’s a really shitty plan.”