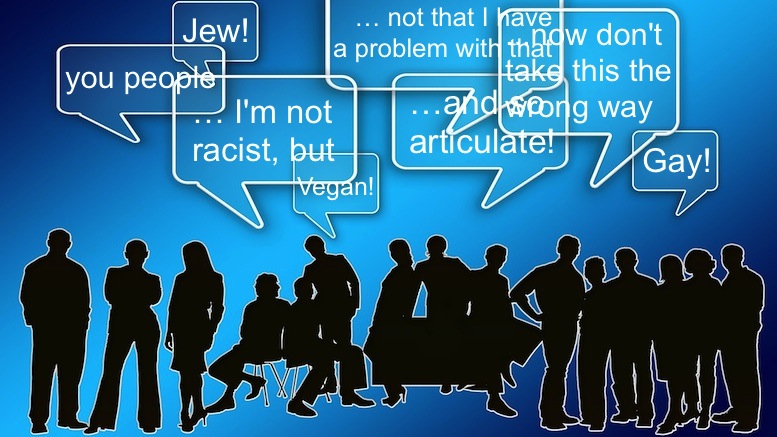 I'm sure they all meant well...

University of Pittsburgh Linguistics Professor Stacey Pinkerton does not believe in fate, but she almost started the day she clicked on the hashtag #HealthyTip and came across this tweet from a pharmacist in Georgia.

“I’m not racist, but I worry some people with darker skin may be getting sun damage without realizing. #HealthyTip”

He went on in a series of follow-up tweets to take great pains to explain that he would never judge anyone based on the color on their skin, except perhaps when giving advice on which SPF factor to recommend as the amount of skin pigmentation actually does have some significance in that context. Professor Pinkerton could barely believe her eyes.

“The phrase ‘I’m not racist, but…’ is well known in linguistics as an antecedent clause – technically a ‘false front’ – that is used immediately prior to the utterance of a manifestly racist statement with malicious intent. In this case, however, it appears that the phrase is being used in a straightforward manner to alert people that a sincere statement is about to be made that directly relates to skin tone in a non hateful manner.”

The tweet was motivated by a magazine article the well-meaning druggist read that said people with darker complexions may be overestimating their natural protection as burns may be less obvious. Though useful information for those going to the beach, from a linguistics point of view this was earthshattering, according to Professor Pinkerton.

“I don’t believe this construct has ever been used this way before in the entire history of human speech.”

In contrast, its use as a means to signal that a bigoted observation is forthcoming abounds today and throughout history, as in this sentence attributed to none other than Plato, the renowned philosopher and founder of the Academy of Athens.

“I’m not prejudiced, but Spartans clap far too loudly at the Amphitheatre.”

The Professor explains that the revelation that “I’m not racist, but…” can be used by humans in a non-racist manner is hugely important as it suggests we may be capable of being a lot nicer than previously thought.

“This is potentially the single biggest advance in linguistics since Noam Chomsky’s Theory of Syntax where he argues that the advent of the recursively nested clause in thought patterns is what distinguishes us from animals.”

A full discussion of this newfound human speech pattern is scheduled to appear in the next issue of the Journal of Language and Social Psychology, though the Professor has no plans to rest on her laurels.

She is also looking for any cases where ‘that’ refers to anything other than someone being gay or being perceived of as gay, as that alone would be highly publishable.

Be the first to comment on "Person Says “I’m not racist, but…” Followed By Assertion That Is Not Racist"