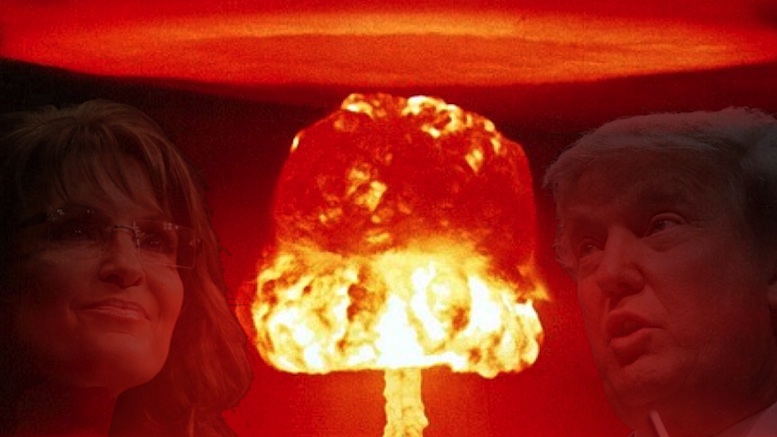 “This is a stochastic process, so just because they didn’t go critical today, doesn’t mean it won’t happen the next time they are that close to one another.”

Though Palin by herself is near critical mass under the right conditions, during the 2008 Presidential election John McCain acted much like the control rods in a nuclear reactor, which slow down the stream of neutrons or dumb ideas that can lead to a self-sustaining chain reaction.

“But when he made a show of suspending his campaign over the financial crisis, we nearly had the most serious nuclear disaster since Three Mile Island.”

This time they say the situation is exponentially more dangerous, as Palin and Trump each have enough fissile material to make a weapon of fearsome stupidity.

“If they do go critical, there could be a devastating explosion of megatons of bullshit such as the globe has never seen.”

The potential destruction is unthinkable, which everyone within a blast radius that encompasses the entire continental United States likely to be rendered permanent imbeciles.

“All it would take for Armageddon to be unleashed is for Trump to say something like Hillary’s bathroom breaks are disgusting at the same time that Sarah Palin says pretty much anything.”

For now they suggest that anyone who has been exposed be scrubbed down and made to watch PBS NewsHour until normal levels of intellect return.

“North Korea may claim they have the H-bomb, but this threat is far more real.”