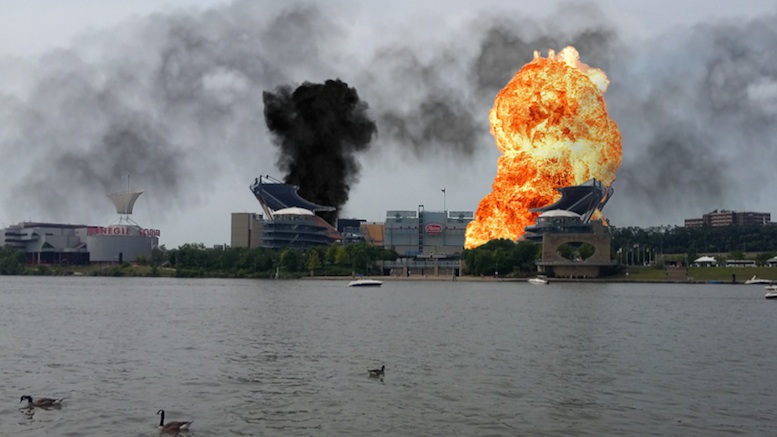 Mayor Peduto made an impassioned call on all Pittsburghers today to pitch in and help the City recover from the greatest disaster to hit it in some time – the Kenny Chesney concert at Heinz Field. Initial reports gave hope that we would be spared this year but it was not to be, which the Mayor admitted was something he, and everyone else, knew in their gut all along.

“But if we work hard we can overcome this challenge so that someday we’ll be able to tell that grandchild on our knee that we were here when Kenny Chesney brought the ‘No Shoes Nation’ to town, and we not only survived, we prevailed.”

He has asked the City finance department to prepare a five year austerity plan to allow funds to be diverted to the clean up and restoration, including the immediate construction of a new state-of-the-art hospital.

“I would hate to think that someone is refused the care they need because our world-class medical facilities are full of concertgoing savages.”

The first two years will concentrate on clearing debris, after which the repair and recertification of damaged infrastructure will commence. Counselors have been brought in to help members of the Steelers Organization who saw what has happened to their beloved stadium, despite every effort being made to spare them that distress.

“We pleaded with them not to come down to the North Shore straight away, but it’s just human nature to want see see what Man can do at his worst, even if it can scar you for life.”

When asked what other funds might be available, Peduto said he’s put in a request for federal disaster funds.

“They gave money to New Orleans after Katrina hit so it’s practically guaranteed they’ll help us too.”