(Dublin, Ireland) In another coup for the hi-tech ambitions of Pittsburgh, hot Irish startup Waffler Inc. [ISE, WAFL] announced today that it has selected the Steel City to be its U.S. base of operations as it seeks to expand the adoption of its revolutionary public messaging service WafflerTM, touted as the Social Media Networking App for people who like substance.

Though similar in many respects to Twitter, Waffler is expected to find its own niche among people who have a lot to say, or as it’s known in Ireland, love to shite on and on. Twitter, despite being a conversation-style application, has always struggled in the land of Saints and Scholars, where its strict character limit is seen as a terrible constraint in a place where one of the more concise forms of the greeting ‘nice day’ would be something like:

“Sure isn’t it a lovely fine day that we’re lucky enough to be in the having of presently.”

It was while pontificating at length on this very matter that computer scientist, and now Waffler CEO, Trevor Lawlor had a fundamental insight, in addition to his customary four pints of lager.

“I realized that the key was not just having an app that allowed you to have more characters, but one that FORCED you to. I knew I was onto something, because the moment I said it, all of us just shut-up for a moment. Seriously!”

That was the moment that Waffler was born, and in no time at all Lawlor had pulled a team together to flesh out the rudiments of its philosophy and implementation. Though the company has already had a modestly successful incarnation in the Irish market as www.Waffler.ie, they have temporarily closed down the service as they seek to re-launch as a global operation with the more acceptable www.Waffler.com domain. When asked who would be considered the ultimate Waffler, Lawlor goes through the obvious litany of Irish raconteurs, like Behan and Tóibín, but ends up giving top honors to an American.

“Bill Clinton – that man could talk the ear off God.”

Pittsburgh was not initially in the running as a base to gain a foothold in the crucial American market, but CFO Aoife Finucane was aware of its unique potential, as a close friend had moved there in recent years, and would rave about it when she returned home every Christmas.

“I heard how it’s a city of neighborhoods, which means young people there grow up being exposed to old folks who hang out in the street and enjoy telling extremely long stories, which sounded promising.“

The moment Finucane visited Pittsburgh in person, she knew her hunch was spot on. She explains it over a very entertaining three-and-a-half-hour lunch with an untold number of amusing diversions along the way.

“… …and then he said – well, I’ll leave that up to your imagination – but to circle back to the original question – the growing high-tech footprint in the East Liberty area was impressive, and I was also encouraged by Mayor Peduto, as he clearly likes the sound of his own voice, which is one of the hallmarks of a good waffler. But most importantly, just like back in Ireland, I found that Pittsburghers have that urge to keep talking endlessly, as if to ever stop talking would force you to look around and become acutely aware of some deep horror about the fragile nature of our existence in this vast universe that you just don’t want to acknowledge.”

She then goes silent as she drifts off into some dark corner of her mind and looks listlessly off into the distance, and is only lifted out of a death spiral into paralyzing cosmic despair when asked to expound on her pivotal contribution to Waffler’s business plan – the so-called ‘Uh-Huh’ accounts.

As her melancholy dissipates as quickly as it appeared, she explains how, whereas a proper Waffler account will require that you always send fully-fledged ‘waffles’, those who are still working on their gift of the gab can opt to sign up for an “Uh-Huh” account which will allow you to participate in a limited fashion initially.

What ‘Uh-Huh’ users will not be allowed to do is interject themselves into a conversation with pithy ideas or cheap shots that are not expounded on at great length. Therefore their comments will be limited to phrases like ‘Uh-huh’, ‘Mmmmm’, ‘Sure isn’t that always the way’, and, in a nod to Waffler’s ambitions in the American market, ‘Ain’t that the truth’ and ‘Tell me about it’. Anytime a ‘Uh-Huh’ user wishes to upgrade their account, they simply have to type out a proper ‘waffle’ (at least 2000 characters including spaces).

When asked what’s next for Waffler, Trevor holds court for over forty minutes covering everything from childhood summers in County Wicklow to a recent academic paper speculating that the whole universe might be a simulation conducted on some vast computer system in a higher dimensional reality. But buried in there somewhere is the answer to the question. 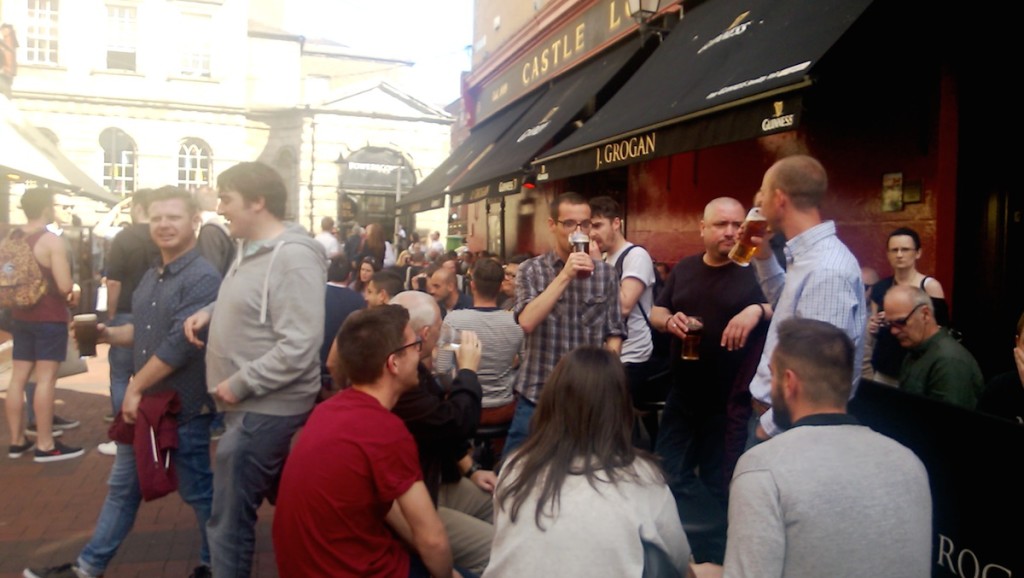 Be the first to comment on "Pittsburgh to be U.S. Headquarters for Irish Social Media Startup ‘Waffler’"