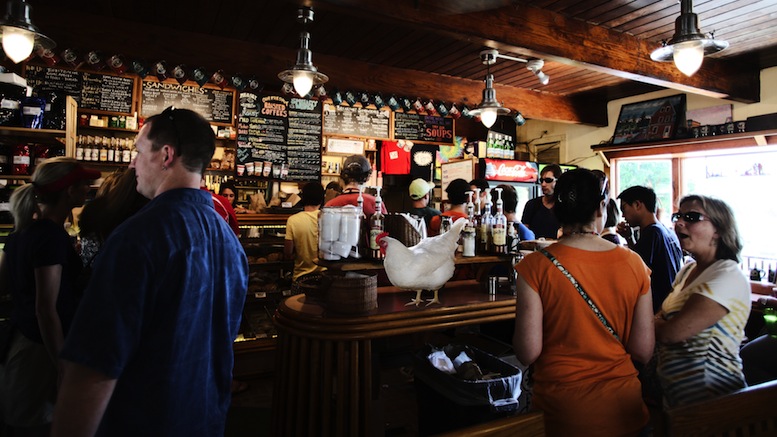 Pittsburgh has been buzzing with talk of not one but two Cat Cafes – the Black Cat Market and the Colony Café. But both have been upstaged in the live-animal-themed cafe business by Lawrenceville resident Roger Strickney, whose Chicken Cafe opened its doors on Butler Street last week.

Roger first became enamored of chickens when he started raising them in a coop behind his 43rd St restored brick townhouse. Initially it was only for the eggs – but he soon discovered they make excellent company.

“It occurred to me that others might enjoy socializing with my outgoing poultry while having a cup of coffee and a yummy snack.”

The concept was born and Roger – who already had premises and money saved for a Butler Street nanobrewery – devoted himself to making his Chicken Café a reality instead.

He was dismayed early on to learn the new cat cafes had strict health and safety regulations to deal with, as he feared he would have even greater obstacles to overcome.

But a quick call to the Allegheny County Health Department changed all that.

“I asked if it was okay to have chickens in a place where food is served. They said of course!”

In addition to gourmet coffee and a variety of tasty vegan wraps and sandwiches, customers may also purchase packets of seeds and grain to feed to the free-roaming chickens.

“And worms too. They love worms.”

As for the Cat Cafes, Roger doesn’t see them as future competitors, as he believes there is room for all to thrive.

“Some days you yearn for the company of a feline, and other days it’s fowl you wish to make a personal connection with. In Pittsburgh you need never be without either.”