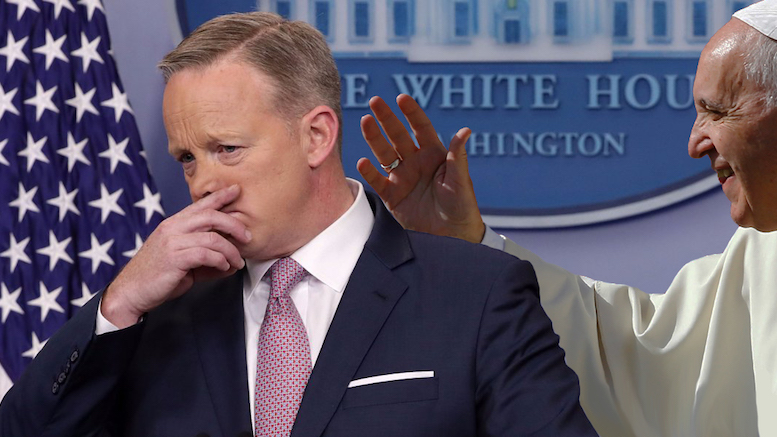 Disguising himself as a foreign press pool reporter with a curly moustache and horn-rimmed glasses, Pope Francis took a front row seat in the White House briefing room today with the knowledge of all the other reporters.

Sean Spicer was surprised when only one hand went up when he asked for questions, so he took the unknown journalist’s question.

Spicer started to say “Fran…Fran…” but quickly was overcome with emotion, something everyone agrees is far more painful to witness than his angry outbursts. A devout Catholic, Spicer’s pain was rooted in his missing the chance to meet the Pope during his boss’s recent visit to Rome.

As Spicer tried to maintain his composure, the disguised Pontiff slipped out so he could remove his outfit and surprise Spicer at the podium once the briefing was over.

Asked later why the leader of the Catholic Church had gone to all this trouble, Francis said he felt bound to enact the stunt once he learned how much meeting him would mean to Spicer.

“It was the Christian thing to do.”

He then criticized President Trump for excluding Spicer from the delegation that met with him seemingly out of pure spite.

“Even the Sean Spicers of this world deserve compassion sometimes.”