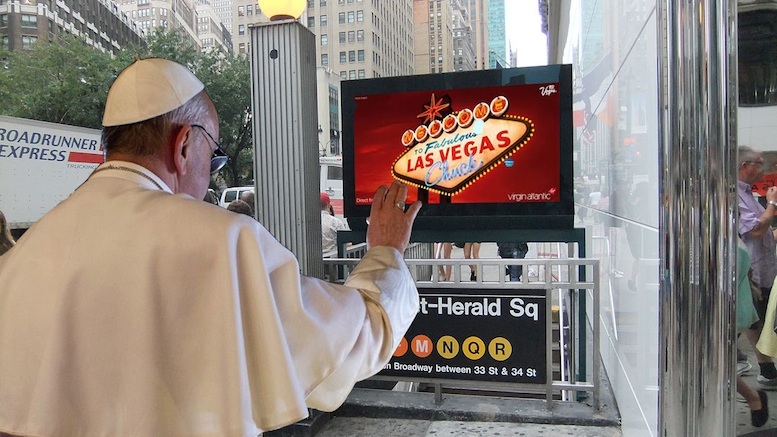 The visit of Pope Francis to the United States has been a glowing success so far, with everything proceeding according to schedule like clockwork. The only spoke in the wheel has been inserted by the Pope himself, who wants to add Las Vegas to his itinerary before his departure Sunday night.

Though he acted like it was a spur of the moment idea, the Pope had earlier remarked that the New York City skyline was spectacular, but wouldn’t a mini version of it with a rollercoaster and an all-day buffet also be wonderful. When asked why Las Vegas in particular, he became uncharacteristically defensive.

“It’s not because I want to see Celine Dion. Her show doesn’t start until September 29 and we have to be back in Rome before then. Or do we?”

His organizers thought about it and concluded it was not out of the question, as long as they could fill his schedule there with activities that would make it look good.

“Sure – I’ll ladle out soup to the homeless and say Mass. Then maybe we could see the Michael Jackson ONE show everyone is talking about. It’s probably sold out but if we used my name? Afterwards I could catch people coming out of ‘Puppetry of the Penis’ at the Jewel Box Theatre and hear confession if that helps with the optics.”

This is not the first time a leader of the Catholic Church has been mesmerized by Las Vegas. In the 1960s Pope Paul VI never made a secret of his wish to see the Rat Pack at the Sands Hotel but never managed to pull it off.

“Nobody is immune to the lure of the City That Never Sleeps, not even the Pope.”