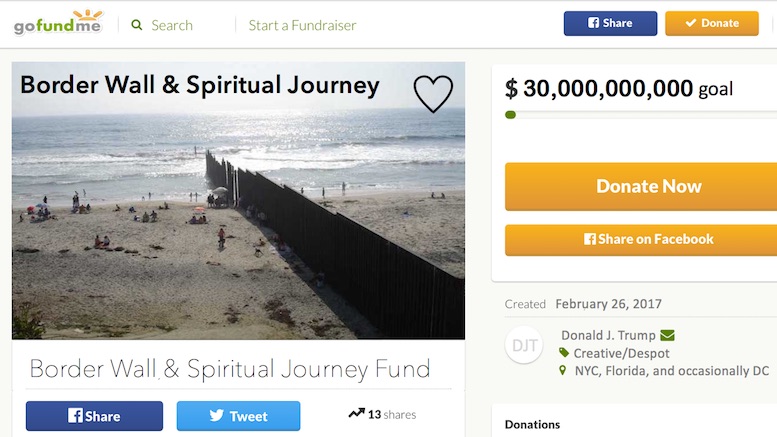 Facing stern opposition from the Mexican Government and Congress over paying for his border wall, President Trump today announced a brand new plan to cover the costs – via a GoFundMe campaign.

In the campaign, the full description of which is ‘Border Wall & Spiritual Journey Fund’, Trump is asking for 30 billion to fund the construction of a 1,989 mile-long permanent barrier along the US-Mexico border.

“They’ll be lots of updates. Believe me.”

As part of the project, Trump promises to embark on a spiritual journey across America with multiple stops in giant aircraft hangers and sports stadia, during which he will give back by having it documented on YouTube and by the world’s news organizations.

As perks for those giving, $5 will get you added to the Trump 2020 Campaign List, while a donation of $400,000 or more comes with a complimentary six months’ membership* at the Mar-A-Lago private resort.

Donations may be tax deductible for people who bother with that sort of thing.