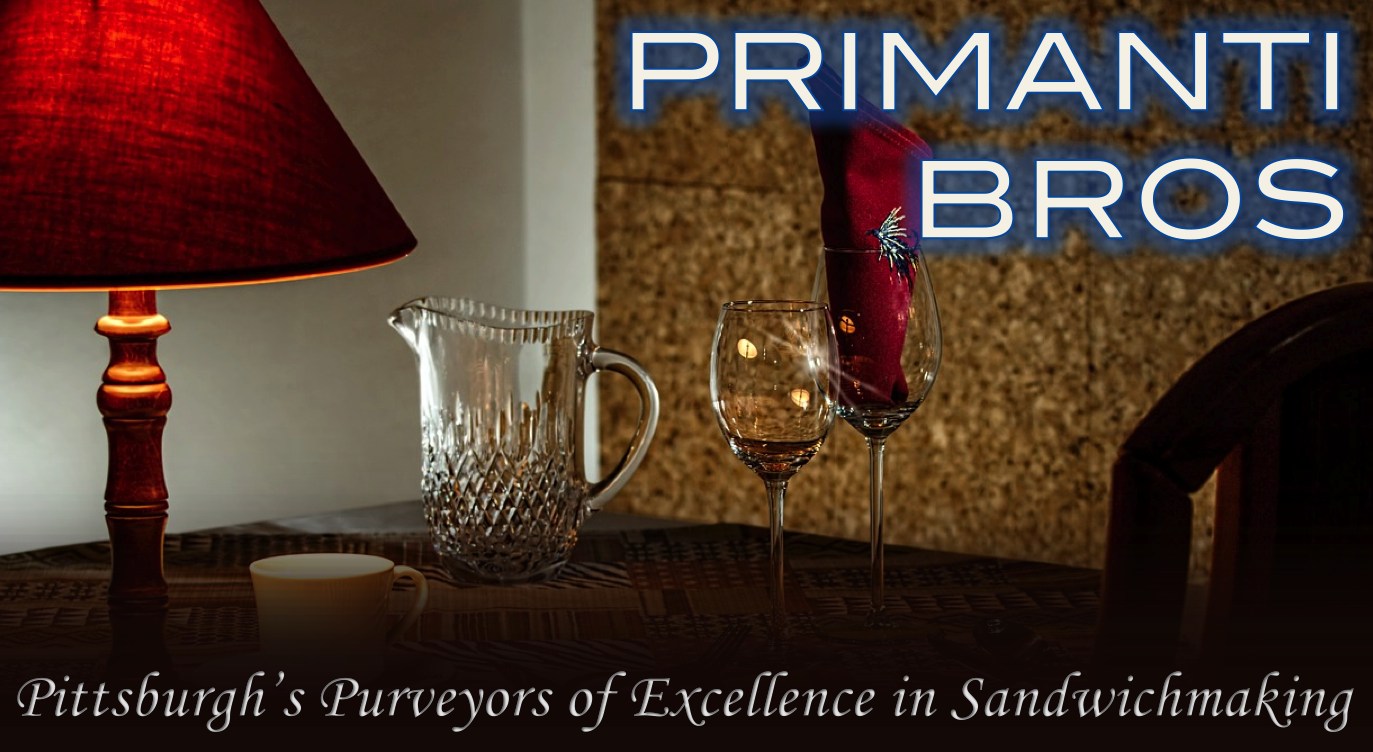 Yinz want a side of truffle-oil-infused asiago croquettes with that?

If you ask a Pittsburgher what is a ‘must do’ for visitors to the city, eating a Primanti’s cheese-steak is the No. 1 answer by a wide margin. The famous sandwich shops are as closely identified with Pittsburgh as making steel and winning superbowls, with the one difference that Primanti’s is still around. However, the familiar image of rough-cut sandwiches delivered on a sheet of wax paper together with a mountain of paper napkins will soon be consigned to memory, as Primanti’s is about to go seriously upscale. Stanley D’Onofrio from their corporate office on the South Side explains:

“Pittsburgh dining is headed upmarket, and Primanti’s does not plan to be left behind.”

The idea that a makeover was needed began when a customer in the Robinson location asked to peruse the wine list, and was distinctly unimpressed with the response. However, Primanti’s had already begun to change without even realizing it. For example, the beers taps already featured such niche offerings as Dogfish 60 and Southern Tier’s 2XIPA.

“If you’d have asked for a beer like that in Da Burgh back in the 90s you’d have been laughed out of tahn. Tastes change, I guess.”

To keep up with the evolving Pittsburgh dining scene, Primanti’s have sought out advice from the top restaurateurs in the region and beyond. Wax paper and 22 oz pours are out, and linen tablecloths and silverware are in. Then there’s the matter of what will happen to the current staff.

“We’ve always prided ourselves on our down-to-earth and hardworking staff, who have always taken great care of our customers in a fun, laid-back style. Which is why we’re letting them go.”

Primanti’s will instead be hiring more diffident staff that exude the subtle levels of contempt that fine dining patrons expect.

“Just like you’d find in any quality restaurant on the European continent.”

Of course the big question on most people’s mind is not about the decor or servers’ livelihoods, but whether the sandwiches will still contain fries.

“One thing that will not change is the signature inclusion of fries in every sandwich, though they will now be twice-baked Belgian frittes with lashings of mayonnaise included unless another condiment is explicitly requested. Mancini’s bread will still be available, though we will also feature a rotating gourmet flatbread of the month.”

When challenged that this makeover may be a terrible mistake, he insists it’s necessary for them to survive.

“Let’s face it – these days Pittsburgh has more in common with Manhattan’s Tribeca district than it does with its fellow rust-belt cities. Either that or every feature article written about Pittsburgh in the last three years is a load of trumped-up bullshit.”

Still, there is a small part of him that wishes the old-style Primanti’s could stay.

“Not so much a small part of me, as every fiber of my being.”

The only thing that could reverse the plans now is a clear sign that the change is unwelcome.

“Perhaps, when you publish this interview, if people were to share it widely on social media as a measure of their support for the way things are, it could be halted.”

We can only hope.

5 Comments on "Primanti Brothers Restaurants To Get Radical Upscale Makeover"