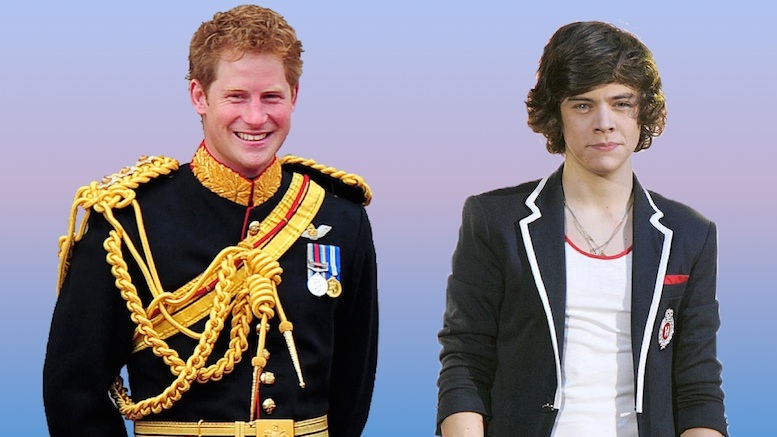 Britain’s Prince Harry and Harry Styles of the popular boyband One Direction are to change places for a year as part of a new reality series called ‘Royal Swap’. It’s the brainchild of Prince Charles’ younger brother Price Edward, the Earl Of Wessex, who previously ran his own TV production company, Ardent, though that ultimately failed. His new venture, however, is deemed much more likely to be successful, especially considering that his nephew Prince Harry has signed up for the first series. The project has secured financial backing from a number of industry giants, including American Idol judge, Simon Cowell, who was instrumental in getting Mister Styles to agree to trade places with the Prince for the inaugural year of the show.

“It would have also been interesting to have a Royal trade places with an ordinary person, but for the first year we wanted to maximize the starpower. And with them both being called Harry, well, it just seemed like destiny.”

The idea was originally floated years ago, but with Prince Harry then still a helicopter gunner in the Army Air Corps, this would have meant Harry Styles might end up being deployed to Afghanistan. Being well aware of the reality of combat himself, Prince Harry doesn’t fault Styles for not wanting to assume that risk, though he says One Direction shouldn’t underestimate some of the dangers they face in the name of British Popdom.

“I’ve been, you know, to some of their concerts and those mobs of teenage girls could make the most battled-hardened veteran run for, you know, cover.”

Harry Styles says there couldn’t be a better time from the point of view of the band.

“With Zayn having left to fulfill his desire to live as a normal twenty-something with a million pound solo recording contract, we were already used to change, so me trading places with the person who’s 5th in line for the throne is just another one.”

Styles is hopeful he can do a good job as a Royal, and fully expects Her Majesty the Queen to ‘set him straight’ whenever he messes up. Prince Harry, for his part, hopes to exert some influence on One Direction, possibly pushing them to live a more edgy Rock & Roll lifestyle.

“I’ll probably, you know, encourage them to take their kit off every now and then, and, I don’t know, maybe piss in a fountain, and, you know, dress up as an SS Division for Halloween. All the usual stuff, basically.”

Future series of Royal Swap are already being planned, including one where Prince Philip will trade places with American actor Ed Asner, assuming they are both still alive.