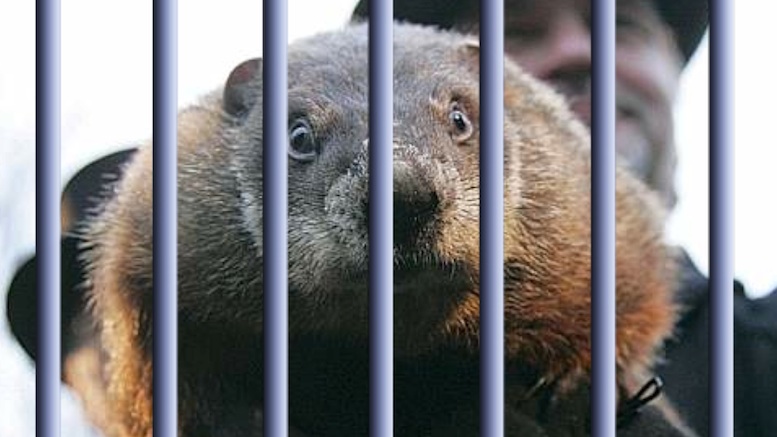 (Punxsutawney, PA) Western Pennsylvania was in shock today, in addition to being cold, after news leaked that Punxsutawney Phil has been arrested for fraud. This follows a lengthy investigation during which it emerged that he deliberately predicted an early summer despite knowing winter was far from over in order to manipulate betting markets. He did not act alone, but in concert with criminal elements out of Ohio who placed huge long-odds wagers on an early summer prediction.

To his credit, local residents say Phil had resisted such pressures for years, carrying out his predictions in a faithful manner despite the promise of huge payoffs if he were to fix the result. Sadly it appears he finally gave in to temptation and deliberately predicted an early summer when he knew almost for a fact that bitterly cold temperatures would still be arriving well into April and beyond.

Those close to him say they were not so surprised to hear he would be indicted as he had been on the decline for some time. Rumors of alfalfa addiction, so often the downfall of those who feel trapped in rural areas, abounded – and there was also a string of dysfunctional relationships with questionable types who appeared to be more attracted to Phil the celebrity instead of the friend they knew.

He also felt under immense pressure due to the rise of a new generation of meteorologically-gifted rodents such as Staten Island Chuck, and was utterly despondent to hear about the growing popularity of Balzac Billy (a.k.a. the Prairie Prognosticator) in Alberta, Canada, who is not even a groundhog, but a man in a costume.

He is expected to be formally arraigned tomorrow once it’s warmed up a bit.