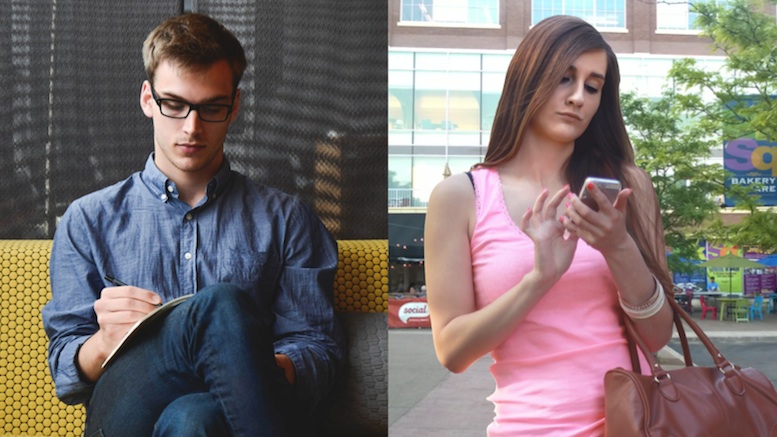 This week Breaking Burgh sat down with two entrepreneurs, Nat and Jen, who are the force behind ‘TBD’, the latest hi-tech venture to take up residence in Bakery Square. With organizations like the Thrill Mill already here to help other startups start up, these two SM visionaries believe it’s time to take the next logical step. I spent an afternoon learning about their meta-ist plans over cinnamon chai lattes served in environmentally-sensitive disposal containers.

JEN: (without looking up from her iPhone 6) Uh-huh.

BB: Perhaps you could start by explaining—

NAT: It actually can mean hello or goodbye.

NAT: Ciao. People here use it like it only means goodbye, but in Italian it’s used for both.

BB: Right. Perhaps you could start by explaining what your new company TBD is all about.

NAT: Certainly. Pittsburgh has seen the big names move in, then the startups, and then startups that aim to help new startups start up.

BB: Are you saying that—

Nat holds up a solitary forefinger in a gesture that indicates I am not to interrupt his thought process. We sit silently for about 40 seconds, occasionally interrupted by outbursts from Jen which are directed at some ‘bitch’ she is communicating with via snapchat who is a ‘total riot’.

NAT: But what about those organizations, like Thrill Mill. Who’s going to help them start up?

BB: And that’s where you come in.

BB: So who helps you start up?

BB: Perhaps you could tell me about your programming background?

NAT: What do you mean?

BB: What languages do you know?

NAT: English. And some Italiano, obviously.

NAT: Have you heard of someone called Steve Jobs?

NATE: Do you think Steve Jobs knew how to program?

BB: Well, I would assume—

NAT: The guy never pulled up a terminal window in his life.

NAT: What he did know was how to get people pumped.

Nat and Jen give each other an extremely aggressive high five.

BB: But surely you need to know something about hardware, operating system, GUIs?

Jen coughs at this point, making a noise that sounds suspiciously like the word ‘dweeb’.

NAT: You want me to say yes. No. The answer is no.

BB: If you have a great idea how will you implement it?

JEN: Duh! You just slap some code monkeys on it.

NAT: We keep three in the basement for exactly this reason.

At this point the interview appears not to be going very well. Nat, while superficially nice, appears to be surreptitiously making the letter ‘L’ with his hand, which Jen finds highly amusing. I get the strange feeling that they are being mean to me for no reason. I decide to confront them directly.

BB: Do you have some kind of problem with me?

NAT: Look, you nerds had a good run when it was all about boards and cables and compilers. But now it’s about people and lifestyle and making connections. Stuff we know how to do. And we’re fed up pretending to pay homage to a bunch of chip jockeys who didn’t get laid enough.

BB: Obviously I realize that when you say ‘nerds’ you’re referring to elements of my readership and not me—

NAT: All we want is to be interviewed by someone who gets us, and is preferable not too visually offensive.

BB: You find me visually offensive?

Nate doubles over in peels of laughter.

NAT: I can’t believe he seriously thought you would go somewhere with him.

JEN: I know! The mere idea makes me want to vomit.

They both contort themselves in protracted laughter. At this point I decide to join in to try to curry favor, even though inside me something is dying.

NAT: Listen, eh…sorry, your name has completely slipped my mind.

NAT: Doesn’t matter. I’ll just forget it again. How can I make you understand. It’s not about–What it’s about is that I can deliver you 15K+ twitter followers before you’ve even launched, and I don’t mean a bunch of drones on a click farm in Malaysia. We can get you to the right people at the cool parties. Jen knows exactly what your social app needs to do to get a shitload of downloads in its first week. As to what dorkscript it’s written in – I mean, who gives a fuck?

JEN: Who gives a FUCK!

Jen screaming the word fuck at me is causing conflicted feelings, since, despite the fact that I should want nothing to do with this unpleasant human being, I fear I will think about her constantly for weeks to come. I also realize I never want to leave Nat’s side. He makes me feel safe.

JEN: It’s really very simple, whatever-you’re-called. The beautiful people are back in charge again. Get used to it.

NAT: But, since you seem so determined to learn the boring details of our php framework, I’ll let one of the code monkeys out for twenty minutes.

A few minutes later an overweight young man appears with a ragged ponytail. He wears baggy khaki shorts and an old black T-shirt decorated with patches of powdered sugar. He looks in my direction and smiles. I feel overcome by the urge not to be seen is his company and make my escape.

I decide to keep the article focused exclusively on Nat and Jen, as I am still hoping they will accept my friend requests and invite me to the launch party.

It’s bound to be awesome.