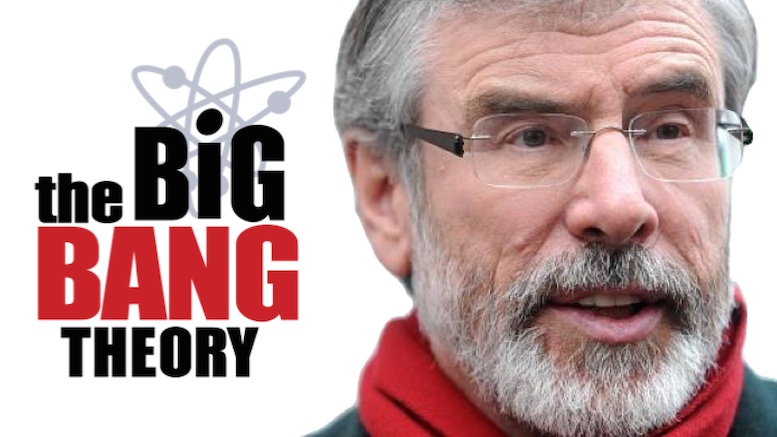 Gerry Adams wasted no time letting his displeasure be known on twitter after he was prevented from attending a White House St. Patrick’s Day event last week. The Sinn Fein President was nominally held up due to a security issue, while fellow party members Martin McGuinness and Mary Lou McDonald were admitted with no problem. Finally, a source close to the incident has revealed the real reason Adams was effectively barred – his stifling fandom of nerd sitcom The Big Bang Theory.

“He’ll brook no discussion of anything else – even if you’ve never seen the show.”

In previous years Washington politicians stuck talking to Adams have tried to reach a compromise with him – by steering the conversation towards a discussion of Rosanne or Cheers – but reportedly without success, as with Adams it’s always his way or the highway.

“You get cornered by him – and he keeps recapping his favorite episodes and laughing away even though you’ve no idea what he’s talking about because you’ve never seen it. Even if you say that to his face he pays you no heed.”

After decades of carefully parsing statements about his party’s position on terror attacks and his rumored membership of the IRA Army Council, Adams knows every trick and doesn’t fall for the ruses and niceties that normally oil the wheels of the Washington political scene.

“There’s no ducking out of the conversation or saying you need to mingle. So I’m glad they finally banned him. Gerry needs to accept that not everyone is as huge a fan of TBBT as he is and learn to be more tolerant of other people’s viewing habits.”

Adams reportedly hogged Obama’s attention at last year’s event with a recount of Sheldon’s most eccentric antics. When Obama proceeded to tell Adams about his favorite TV show, The Wire, Adams continued talking over him about why Penny was such an effective foil for the other characters.

“That was the last straw.”