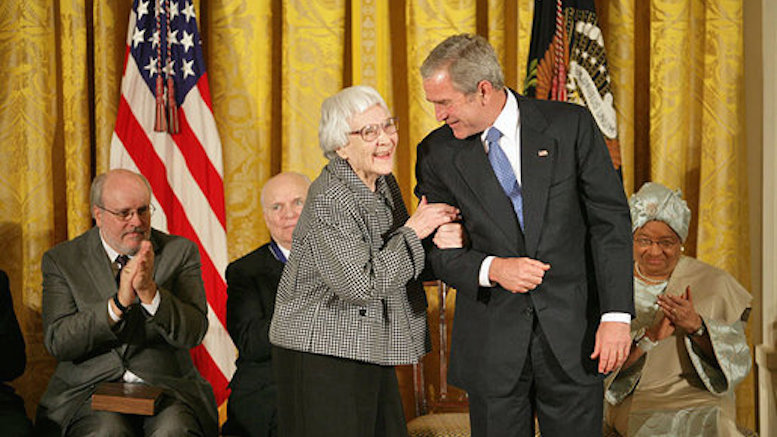 Someone who enjoys toying with the American public, and Harper Lee.

The literary world is ablaze after Harper Lee’s new novel, ‘Go Set A Watchman’, shocked her many fans with its portrayal of Atticus Finch as a cranky old racist. This was especially the case for those who had named their children after the supposed goody-two-shoes attorney. These unfortunate real-world Attaci have been plunged into existential crisis, as they suddenly find themselves named after a despicable character that Gregory Peck wouldn’t touch with a barge pole were he still alive.

Some critics expressed admiration for the more nuanced portrait the new work presents, as opposed to the almost saintly portrayal in ‘To Kill A Mockingbird’, which, they argue, reflects a literary shortcoming. Others wondered if Lee has been shortchanged by merely being lauded as one of the twentieth century’s literary giants, when this new development shows she deserves to join that elite club of punking avant guardists, populated by such revered titans as Knoxville, Steve-O, and Kutchner.

But it seems that there is yet another twist in this literary tale, as word has leaked of a third Harper Lee novel, ‘Take Out The Trash’, to be released next year. It will surely please her disheartened fans, for [SPOILER ALERT] it is there revealed that Atticus Finch was only pretending to be a racist in ‘Go Set A Watchman’ to establish his bigoted bona fides, so that he could fulfill his dream of working undercover as a federal agent to infiltrate the KKK.

In one thrilling passage from the final book of the trilogy, white surpremicists test Finch by making him snort some blow, knowing that undercover federal agents are not allowed to break the law. Just before doing so, the wily attorney distracts the assembled clan members by yelling, ‘Look, a black man!’, and swiftly swaps out the cocaine for harmless baby powder, before doing a huge line right in front of them.

The level of trust he gains allows him to bust the whole organization apart, leading, by the novel’s end, to a racism-free society just like the real one we enjoy today. In truth, we should have known all along that we were in good hands with Harper Lee, for she understood the quintessential truth that ‘To Kill A Mockingbird’ revealed, which is that most people like their heroes to be drawn in black and white, but mostly white, and only in the safe confines of fiction.

While ‘Go Set A Watchman’ is available now, the exact publication date for ‘Take Out The Trash’ is uncertain due to pending litigation initiated by Donnie Brasco.