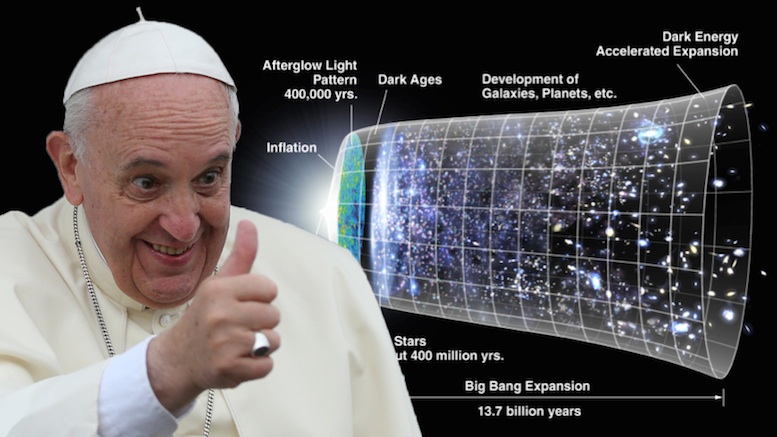 [CERN, Switzerland] Physicists and cosmologists are breathing a huge sigh of relief at the news that Pope Francis has publicly endorsed the Big Bang Theory, which they have been tentatively working on for decades now.

“True, we did have ample empirical evidence from the Hubble telescope and simulation studies conducted with the Large Hadron Collider, but, without the okay from the leader of the World’s 1.2 billion Catholics, how confident can you really be?”

Their initial excitement quickly turned to anxiety as they wondered if they had misunderstood his remarks in an act of wishful thinking.

But a call to the Vatican confirmed that the progressive Pontiff did indeed mean the scientific theory describing the evolution of the Universe from a singular point in space-time to the myriad of galaxies we now observe moving away from us.

“That is what I meant. As far as sitcoms go, I only watch M.A.S.H. reruns. That Father Mulcahy is a hoot!”

The new Pope may have taken his cue from Pope John Paul II, who in 1992 famously confirmed that the Earth goes around the Sun, after the Church condemned Galileo for proposing just that a quarter of a millennium beforehand. A NASA scientist recalls how nerve-wracking it was exploring the Solar System back in the nineteen seventies without explicit endorsement of their methodology by the Holy See.

“When we sent those Voyager probes out we were literally flying by the seat of our pants. These days things go much more smoothly because we are no longer haunted by fears that our heliocentric assumptions are totally bogus. Thanks J.P.”

In a much speedier process, Pope Francis is accepting the validity of the Big Bang Theory a mere fifty years after it received general acceptance in the scientific community. This latest announcement is not limited to physics and astronomy circles either, as the Bishop of Rome has also declared that the Theory of Evolution is to be taken seriously by his flock. Though this has understandably disappointed Creationists, biologists are ecstatic at the news.

“We’ve paid lip service to Darwin’s Origin of Species in the past and incorporated its logical consequences into modern genetics and cellular biology, but we could never shake the feeling that it was ultimately the idiot musings of a halfwit who watched birds too much. Until now that is!”

Next up, Pope Francis is expected to weigh in on the validity of quantum mechanics, as he privately admits that his iPad, which depends in part on wave-particle duality, feels pretty real to him.