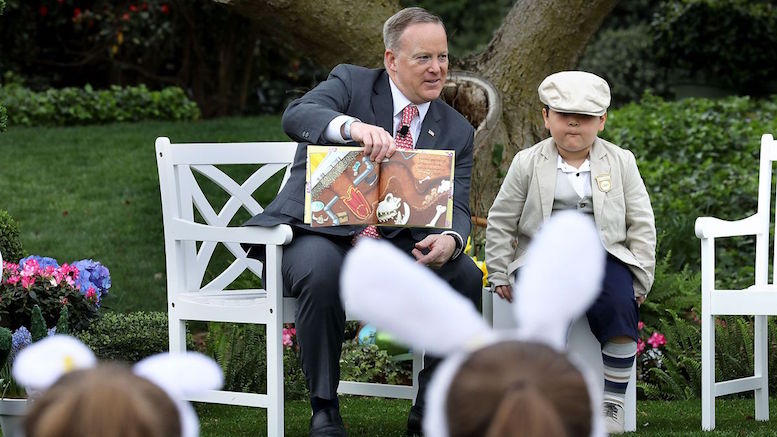 There were widespread sighs of relief at the White House Easter Egg Roll today after gaffe-prone spokesman Sean Spicer made it all the way through “How To Catch The Easter Bunny” without becoming an apologist for one of the worst tyrants in the history of humankind.

Spicer held the children in rapt attention, and White House staff in even more rapt attention knowing that at any moment Spicer might decide impromptu Holocaust denial is the best way to get his point across.

The ordeal was particularly stressful both because of the number of impressionable in attendance, but also because the theme of hunting down and catching the Easter bunny is riddled with potential for positing ill-advised analogs with the Third Reich.

Midway through the reading he appeared to pause for a while, which seasoned Spicer watchers believe to be due to the intense focus he needed to maintain to avoid delving into an aside about how Hitler was said to be quite fond of animals and would never chase down a nice bunny.

Fortunately no such thought ever managed to pass his lips. It was reportedly not an initial slip-up by Spicer that people were afraid of as much as the resulting apology, when he always seems to make the hole he’s dug himself ten times deeper.