In one of the most ambitious and elongated April Fools’ pranks ever attempted, the GOP has revealed that it’s entire primary process to date has been a hilarious send-up, according to a tweet by party chairman Reince Priebus that appeared mid-morning: 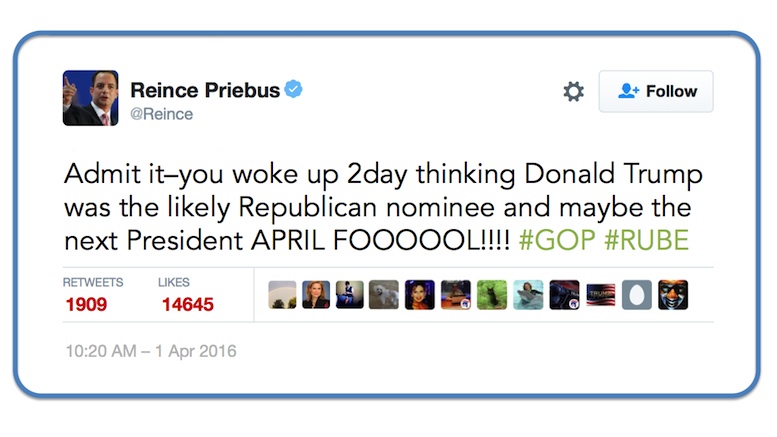 He made a more detailed post on the main GOP website explaining that everything that’s happened so far was a big ruse they played on the public – whom they hope will appreciate the joke and take it in the good humored spirit of fun in which it was intended.

“After so many years of being seen as humorless and obstructionist, we wanted to give everyone a good laugh!”

The idea was so popular when proposed as a way to humanize the Republican Party that everyone wanted to get in on the act.

“We decided to let them all play a part and began the election season with a thoroughly ridiculous 17 candidates – who would all play grotesque caricatures for the hell of it instead of acting like real human beings.”

Party leaders admit they feel slightly guilty about exploiting the nascent racism and misogyny that has always lurked below the surface of much of America, but said a good ‘Gotcha!’ excuses some underhand behavior.

“Some of the voters who really fell for it might just want to critically examine themselves – because some of those fake policy position were decidedly odious.”

The GOP establishment wants to extend a special thanks to Donald Trump, who used all his TV skills to twist his fairly unpleasant brash persona into a thoroughly unpleasant racist persona.

“Obviously no-one can get away with being that much of a demagogue in real life, and certainly not someone representing a major political party for the highest office in the land!”

Priebus then informs voters and local party operatives that starting April 2nd, the real Republican Primary process will begin on an accelerated timeline, and all States that have held primaries or caucuses for the joke candidates will be allowed do-overs to choose from a slate of five reasonable candidates to be announced shortly.