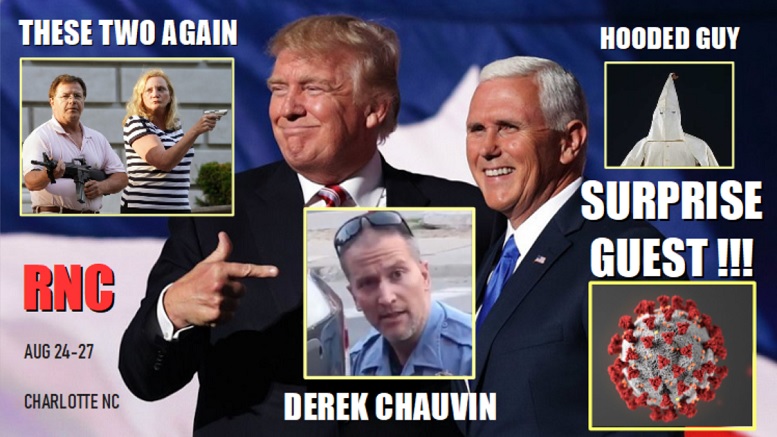 “We are so pleased Derek accepted our offer of a 15 minute speaking slot, though he said 9 minutes should be more than sufficient to get his important message across.”

Though initially thought to be unavailable, the virtual nature of this convention made it possible to include the former Minneapolis police officer as part of the proceedings. He joins a stellar lineup including the St. Louis gun couple together with perennial favorite, Hooded Guy, who organizers says always manages to bring supporters out of their shells.

“Hooded Guy seems to know the crowd better than they know themselves. And we don’t even know if it’s the same guy each time – because he’s always in a pointy white hood!”

Nominating conventions have always been an opportunity for rising stars to make their big break, and this year is no different with GOP favorite COVID-19 rumored to be making a special appearance.

“Despite his small stature, this plucky little fellow knows how to network effectively and makes a strong impression.”

President Trump in particular has been a tireless advocate of the newcomer, and – albeit sometimes reluctantly – the Republican party has been there to back him up.

“If Trump wins what would be his second and final term, you can expect to see COVID-19 everywhere come 2024.”