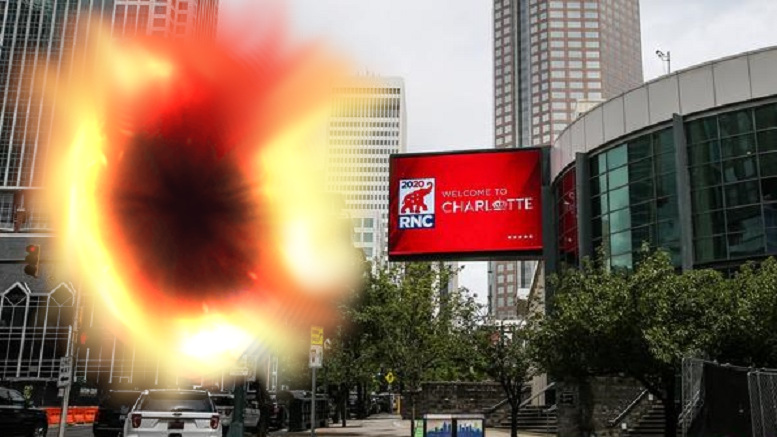 (Charlotte, NC) Organizers of the Republican National Convention taking place in Charlotte reassured locals today that a blazing portal to the Underworld that has appeared outside the convention center does not pose a threat to them.

“It’s only there to accommodate a surprise speaker we have lined up and not to vacuum up your souls into the Eternal Lake of Fire.”

The committee originally assumed the speaker would arrive using a more conventional mode of transportation, but he insisted on doing things his way.

“We offered to arrange for an Uber to pick him up from the airport, but he said ripping a fiery anus in the fabric of spacetime made for a better entrance.”

Though he was said to be ‘giddy’ at the prospect of addressing the convention, the speaker was reported slightly peeved at having been ‘scooped’ as he sees it on a number of issues.

“The other speakers have stolen some of my best material, including spreading pestilence, tearing families asunder, and fostering hatred of the ‘other’ as a means of maintaining total dominion over all the peoples of the Earth.”

Nevertheless he said he relishes a challenge, and looks forward to doing his best to impress the crowd.

“You may think it would be easy for me, but that Donald Trump Jr. sure is a tough act to follow!”