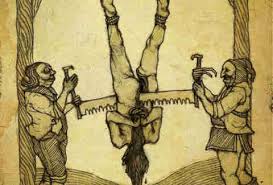 Having been rebuked for posting a picture of a federal judge involved in his case with a gun target superimposed, longtime Trump associated Roger Stone promised to behave properly in future.

“I will henceforth limit my violent threats towards the Federal judiciary to my person.”

Stone has accordingly removed the offensive post, and instead got a lower back tattoo of a Federal Judge being disembowelled and sawn in half.

“It doesn’t mean anything, other than what I want to happen to that Federal Judge.”

President Trump said he was aware of the development, and would consider what action to take in light of Stone’s ‘tramp stamp’.

“I can’t promise the sawing part given the sensitivity over what MBS did.”