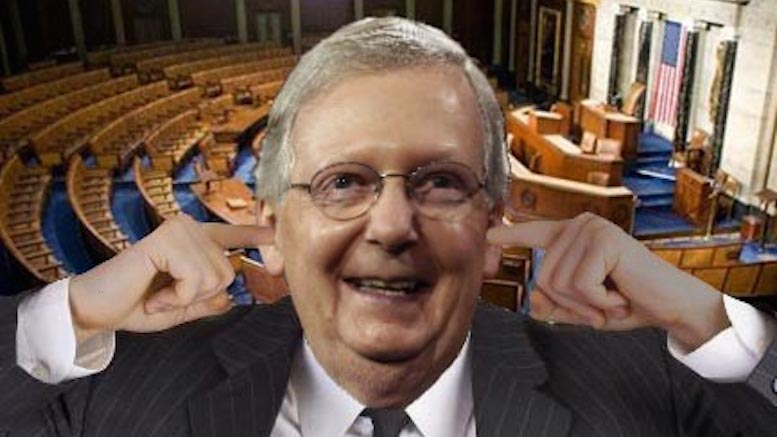 A Rumor that Merrick Garland – Obama’s nominee to the U.S. Supreme Court – was wandering about the U.S. Capitol building had Republican Senators scurrying to find a hiding place today lest they bump into him which they fear could be construed as a meeting – something they have vowed not to do under any circumstance.

Most hid under desks or chose other obvious hiding spots that wouldn’t fool a small child, let alone an exceptionally qualified moderate judge of the U.S. Court of Appeals. Utah Senator Orrin Hatch was notable for his unorthodox choice of ‘playing possum’ in the middle of the Senate floor.

Mitch McConnell was taken completely by surprise and, unable to find a hiding place in time, put his fingers in his ears and shouted ‘LaLaLaLaLaLa’ continuously so he could not be accused of engaging with the entirely reasonable SCOTUS pick.

In the end it was a false alarm, which originated with an anonymous tip. The staffer who answered the call said he didn’t recognize the prankster’s voice, though could hear him saying ‘I’ll be right there, Michelle’ as he hung up.