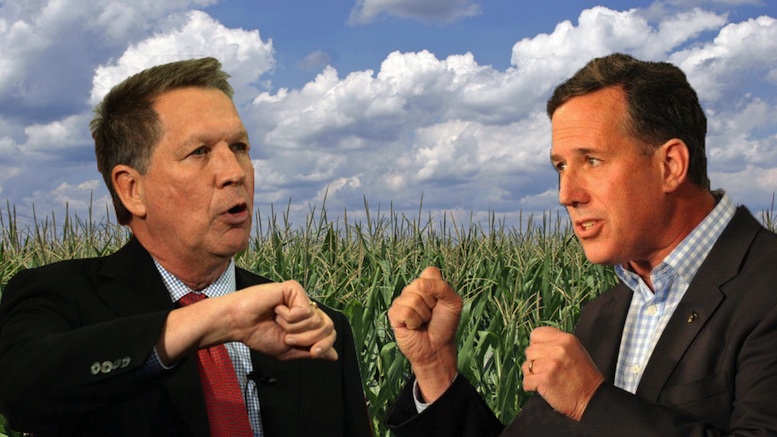 May the best loser win!

With Rick Santorum and John Kasich both stuck on a solid 1% in the latest CBS News Iowa poll, it was perhaps only a matter of time before the question of which politician was the best no-hoper would lead to a physical confrontation between the two proud men.

The argument started when Santorum started bragging about having won the Iowa GOP Caucus in 2012 within earshot of Kasich after both campaigns scheduled ‘Meet the Candidate’ cookouts in the same cornfield. The Ohio Governor shot back that at least he’d made it to the grown-ups table this time, referencing the fact that Santorum has not featured in any of the primetime debates. A staffer had to separate them when the no-stakes dispute turned physical.

“I thought they were playing ‘Pat-a-cake’ at first, but then I realized they were fighting – sort of.”

In the end, they made up with each other after bonding over the delicious fact that Mike Huckabee had a whopping 0% share of the vote when rounded to the nearest percentage, and Jeb Bush was still a walking punchline no matter what he polled.