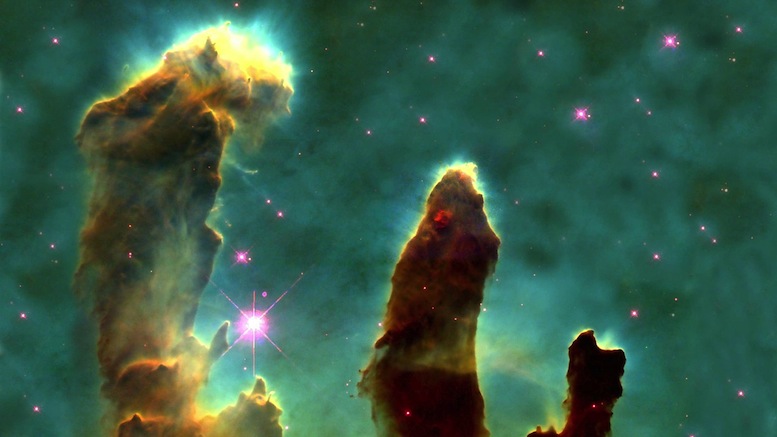 The Eagle Nebula - very impressive, unlike us.

[Cambridge, UK]  Cosmologist and polymath Clara Durkins is no stranger to difficult problems, whether it’s interpreting the newest findings from the Hubble deep space project or contemplating the latest ill-fitting discovery in the fossil record. It was whilst having dinner with an economist friend to discuss the Backus-Kehoe-Kydland puzzle, that, in what can only be described as a Eureka moment, she suddenly saw through all the convoluted arguments regarding the biggest mysteries facing Humankind and realized the common denominator that accounts for each and every one of them.

Her excitement grew as she realized paradox after paradox that philosophers, economists, and sociologists have struggled to understand with increasingly complex theories and models could all be explained at a stroke by her singular insight. She postulates that much of our intellectual effort since the Age of Enlightenment has actually worked to obscure this simple fact as it misled us into thinking humanity was far more advanced that it actually is.

“Let’s take an emotional species that makes most of their decisions based on ever-changing moods and unknowable subconscious biases and motivations and try to understand them using logic and science. Like that was going to work!”

Her dramatic conclusion is further supported by the observation that innumerable species of plants and animals are known to avoid and recoil from harmful stimuli, whereas most homo sapiens actively seek out highly toxic stimulants even though they have been educated ad nauseam on their many harmful, even life threatening, effects.

“Can someone say stupid!”

Ironically she was almost beaten to the punch half a millennium ago when,  in 1651, Thomas Hobbes penned his epic work Leviathan, in which he famously wrote that the life of man was nasty, brutish, and short.

“He was so close to the truth. If only he’d realized that it wasn’t just the life of man that was nasty and brutish, but man himself – and that additionally he is a total idiot.”

Despite our grandiose image of ourselves, it appears our worldview is so puny that we can barely wrap our minds around the glorious simplicity of the underlying reality, namely that as a species we’re just not all that. Clara offers a simple analogy to illustrate why humans are wasting their time thinking they can attain a state of nirvana anytime soon.

“Human beings trying to live in perfect peace and harmony is kind of like pigs thinking they’re going to start an art movement. They can dream all they want but at the end of the day they’re still pigs with hooves. Any art they create is going to be shit.”

As further evidence that we are incapable of having intraspecies disagreements without resorting to killing each other – something the humble tabby cat has long since achieved – she points to the paucity of our notions of why being good is important.

“Our most sophisticated ‘idea’ for why we should be good to each other is that there’s some invisible person up in the sky who says we should. And we even manage to slaughter each other over what this unseen deity looks like. Talk about losers!”

The cheerful Renaissance woman has also solved the problem of why so many humans live in financial bondage to so few, and why tyrants have risen up repeatedly throughout the ages and been allowed to dominate their fellow man.

“Oh yes – I was so excited about my first discovery that I almost forgot I solved that too. It appears that in addition to being morons, we’re also cowards.”

Given our fondness for turning on the weakest and poorest among us out of fear and convenience, it’s no surprise that nascent demagogues would exploit that to gain our loyalty and assert their power.   Once they have a foothold, our innate cowardice means their strength grows rapidly.

“It’s a miracle it doesn’t happen even more often.”

Clara hopes that now we know the reason for all the pain and suffering in the world, we will redouble our efforts to take on the much-harder-than-previously-thought task of making things at least a little better.

“Einstein once said the correct explanation for that which we seek to understand should be as simple as possible. Well how’s this for simple – We suck!”