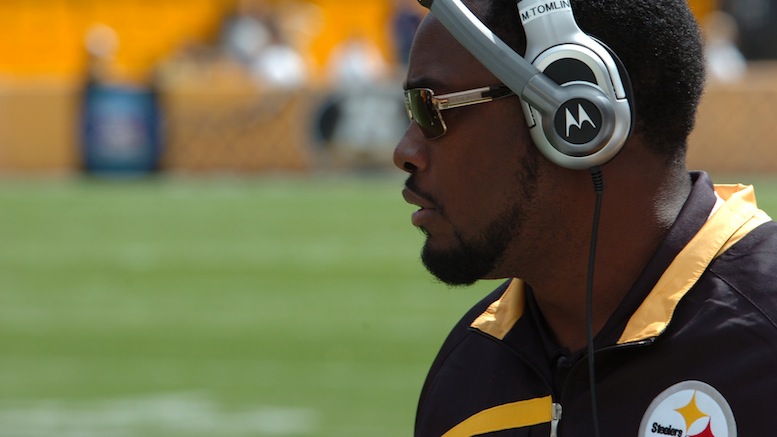 [Latrobe, PA, 27 July 2015]  Training camp has arrived and the Steeler Nation is all fired up.  It promises to be a season like no other, because Coach Tomlin has finally asked for – and received – supreme authority to run the organization as he sees fit. In a meeting with the Rooney family, he demanded a totally free hand in any and all matters in return for delivering the mightiest powerhouse the NFL has even seen.

“For I have the capability, the opportunity, and the readiness to do just that.”

The Rooneys, famous for their modest living and no-nonsense approach to the game, liked what they were hearing and gave Tomlin their blessing.

“From now on our instinct for ultra-hard work and not indulging one iota of frivolous behavior is made manifest in the form of an all-powerful Coach Tomlin who will no longer be required to pay any heed to public opinion, the press, or any other terrestrial entity. As to his methods we will ask no questions and seek no answers.”

Wide receiver Antonio Brown, who caused quite a stir when he arrived at camp in his Steeler-branded Rolls Royce, appeared to have quickly jettisoned his lighthearted attitude. This was especially apparent when he was asked to comment on how the first day of training went.

He continued to repeat the phrase in a monotonous voice as he walked right past his prized motor vehicle. Tight end Heath Miller was more forthcoming about what it was like under Tomlin 2.0.

“You ever seen the film Full Metal Jacket? I wish I was Private Pyle in that movie right now, cause that’d be a walk in the park compared with what’s going on at St. Vincents. Don’t quote me on that. For the love of God don’t quote me.”

When it’s suggested that being too hard on the players might result in some of them departing the franchise, even those who are nearing the end of their current contract insist it won’t be an issue.

“Free agency? Don’t want it. You don’t leave the family. You hear me? You DON’T LEAVE THE FAMILY. Make sure he knows we said that.”

All this is in sharp contrast to the period when Tomlin first arrived in Pittsburgh. Then the first-time head coach felt he had to tread carefully to earn the locker room’s respect, though all mention of that time appears to have been scrubbed from the veteran players’ memories.

Quarterback Ben Roethlisberger at first appeared to be unscathed by the shift in approach as he regaled the media with his high hopes for the upcoming season. However, as he continued promising a record-breaking season unlike any other, it became clear that he was hallucinating that everyone he spoke with was the fearsome Steeler coach.

The atmosphere of total dedication even extended to the press in attendance, as seen when a green reporter yelled out an unfortunate remark as Tomlin was passing.

Tomlin briefly paused as the words reached him, and then resumed his assured stride. The rest of press pack, led by Ed Bouchette, promptly surrounded the neonate sports reporter for a collective pummeling, before placing his battered corpse under the uprights to appease the Tomlin Godhead.