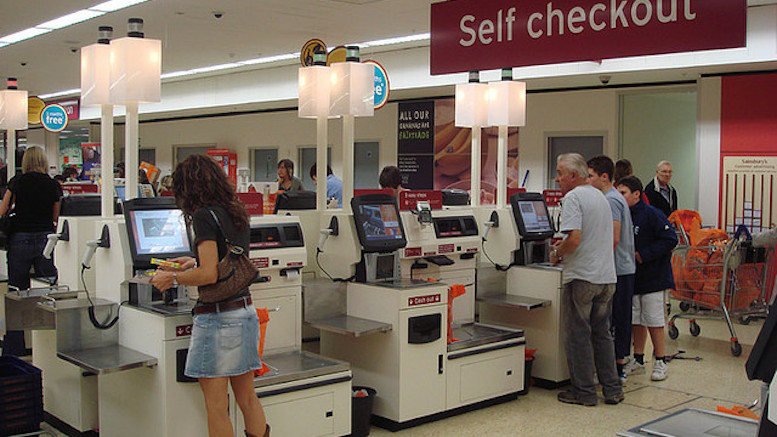 Thankfully, human interaction at grocery stores can usually be avoided by using these. [Image credit: 'Self Checkout' via Commons uploaded by SchuminWeb license CC BY 2.0.]

A man is still recovering from a fatal blunder made when attempting to buy groceries at his local store, right after the cashier made a perfunctory inquiry about his well-being that was never meant to be answered.

“Normally when I make purchases I use the self check out lanes. But they were down so I had to go to one of the staffed lanes instead. I guess I really messed up.”

Fearing he was out of his depth, the man consulted with a lexicologist who explained that such polite inquiries are not meant to be answered sincerely under any circumstances. Parroting back the very same inquiry is considered appropriate and muttering a curt ‘fine’ is acceptable. He was interested, however, to learn that his lengthy monolog on how he was faring in life was not always the giant faux pas it is today.

“In the Middle Ages – and even up to the mid-twentieth century – the question ‘How’s it going?’ and its variants had real relevance since you had to ascertain if a stranger or causal acquaintance was playing host to a raging airborne pestilence that could kill you and your family if you remained in close proximity to them for any length of time.”

But he now understands that in modern times the inquiry has turned into a meaningless platitude that is never to be taken seriously for fear that the efficiency of commercial transactions be impacted. Ironically, the cashier who was subjected to his graceless admission regarding his current state of mind now wishes he’d come back to give an update.

“At first I was all WTF weirdo – I don’t care about your crappy life – but the funny thing is I later realized I was really hooked by the details – and he was just about to go into his childhood traumas that left him unable to function normally in society when my reaction scared him off. Hopefully he’ll appear in my lane again.”

Be the first to comment on "Socially Inept Man Responds to ‘How’s It Going?’ With Detailed Explanation"