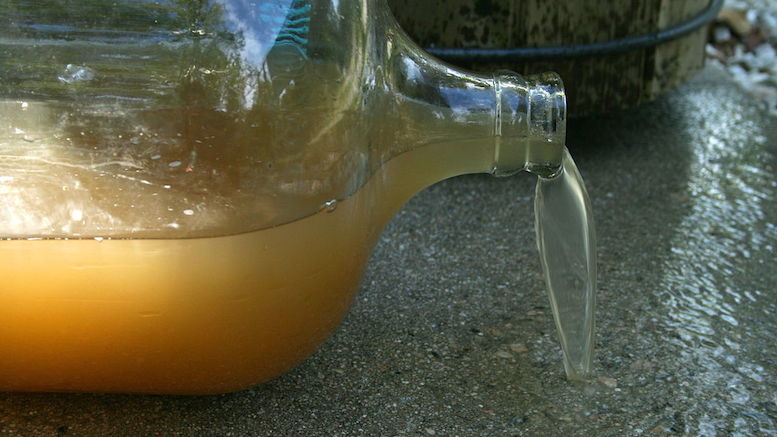 Image credit: ‘Dirty water spilling from a bottle’ by Ildar Sagdejev licensed under GFDL via Commons.

After decades of having their products targeted as being unhealthy for both children and adults, the decision to switch the Flint water supply from the Detroit water system to the Flint River to save money has finally given the soft drinks industry an argument as for why children – at least those growing up in Flint anyway – should be allowed to drink their products instead of water.

“It’s true that our beverages have no nutritional value and are packed full of sugar – but guess what they don’t have – LEAD!”

While consumption of soft drinks can lead to obesity and a whole range of medical problems down the road, the industry points out that children at least get a couple of okay decades first, instead of having their developing brains poisoned by massive levels of heavy metal toxins. They also insist the acid levels in products like Coke and Pepsi, which can destroy teeth enamel, shouldn’t be a cause for concern – if the alternative is drinking from the Flint water supply.

“Auto plants have stopped using Flint water because it literally eats car parts up from the inside out. Guess letting your precious offspring drink nothing but orange soda all day doesn’t sound like such a bad thing now, huh?”

Other companies have taken note of the beverage industry’s approach, and are now making their own cases for why their harmful products should be considered okay for children – if they’re unlucky enough to grow up in Flint, Michigan.

“Let’s say your five year old is feeling fidgety and needs to occupy their hands and mouth. They could pour and drink a glass of water, or they could cradle one of our smooth filter cigarettes before drawing it to their lips and inhaling the sweet smoke of a Marlboro Gold. Which is more unhealthy? If you’re from Flint I think you know the answer.”

Despite being long-ignored by the administration of Michigan Governor Rick Snyder, the situation in Flint is so dire that medical experts at the CDC have had to upend decades of conventional wisdom on proper child rearing.

“If you child is determined to drink from the faucet, distract them at all costs. If that requires offering them alcohol or the chance to play with a loaded firearm, then so be it.”

Getting children out of the house is highly recommended. While street gangs are often derided as a cause of early death among otherwise healthy individuals that have everything to live for, joining one means your teenager will be away from your water supply, and likely living off a healthier diet of Redbull and drugs.

“Often times when you are shot during the course of urban gang warfare, major arteries are missed and you live a full life with nothing to remind you that you were shot up except a small scar. Can you say the same if you drink that battery acid coming out of the taps in Flint?”