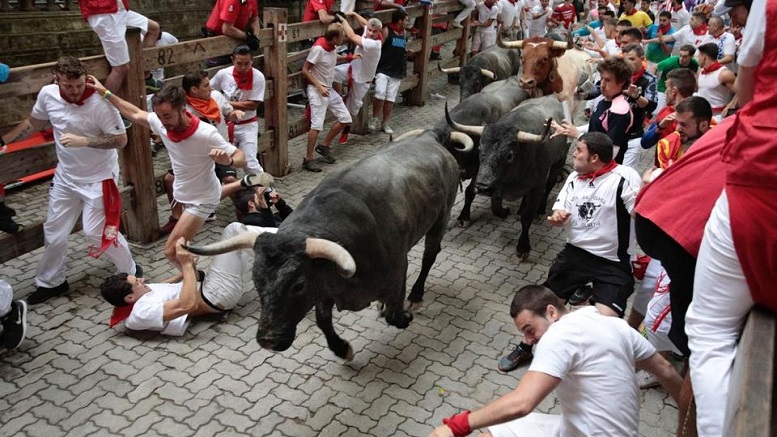 (Pamplona, Spain) Noting how much he enjoyed his appearance at the Daytona 500, the Kingdom of Spain has officially invited President Trump to attend the 2020 Running Of The Bulls festival this summer in the same capacity.

“Nothing would please us more than for you to attend and perform yet another lap of honor to celebrate your impeachment trial victory.”

Trump would be followed on his lap of the course by an honor guard of Spain’s finest bulls, according to Prime Minister Pedro Sánchez.

“As testament to your legendary machismo I will personally select only the mightiest and most aggresive bulls to pay proper tribute.”

Given the narrow streets the run passes through, the Presidential limousine or ‘Beast’ cannot be used so the lap will take place on foot instead. Plans call for Trump to be given the honorary title of Generalissimo – equivalent to the position of Grand Marshall – and a special outfit will be commissioned for the occasion.

“Our great designers have fashioned a costume befitting your greatness with a flowing cape made of the finest red cloth.”

The gesture is not entirely selfless as festival organizers say the appearance of the US President would lead to a record breaking audience for the event.

“We estimate a capacity crowd and a worldwide live television audience in the billions.”