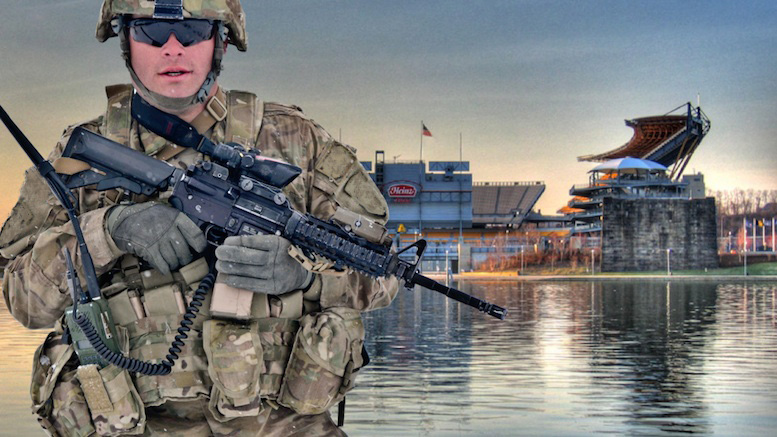 Late yesterday Pittsburgh officials tasked with overseeing security during the Kenny Chesney concert at Heinz Field admitted they were woefully unprepared for the task ahead Out of desperation they called on the U.S. Military for assistance, and a special task force arrived at Pittsburgh IAP Air Reserve Station in Findlay Township early this morning. As they prepared to move out and occupy the North Shore, we were able to grab some time with Major Keith McBride, who is the ranking officer on the ground.

Breaking Burgh:    Can you describe what happened yesterday?

Major McBride:    Someone called saying they had a situation in Pittsburgh and desperately need reinforcements.  He kept saying ‘They’re coming. They’re coming’. The man’s voice was trembling so I knew it was serious.

BB:    How were you able to convince your superiors to green light the mission so quickly?

MM:    Given the recent disengagements from Iraq and Afghanistan, we are always looking for realistic training opportunities to maintain combat readiness. Granted, a concert at Heinz Field is not a war situation, but when you’re on the ground and it’s Kenny Chesney headlining, sometimes it’s hard to tell the difference.

BB:    What did you find when you first got here this morning?

MM:    We could see local officials had tried their best, including erecting barricades on the river banks to defend from an amphibious assault, but the fear in their eyes was unmistakable.  Most of them were clearly still suffering from PTSD resulting from prior engagements in previous years.

BB:   What would you say is the most important thing to remember when confronting an enemy like this?

MM:    The biggest mistake is to underestimate them.  They have vast strongholds in Ohio with countless forces in reserve. State lines mean nothing to these people.

BB:    Do you plan to enforce the selfie stick ban that so much has been made of?

MM:    Hell yeah.  Have you seen what an enraged drunken Chesney fan can do with one of those things? It’s not pretty, and I was in the Battle of Fallujah, so I’ve seen some stuff.

MM:    Tough.  Not only do they practice the ‘scorched earth’ policy used by Sherman on the March to Atlanta, they also cover the scorched earth with trash – making the postwar period of reconstruction even more difficult.

Be the first to comment on "U.S. Military To Police Kenny Chesney Concert At Heinz Field"