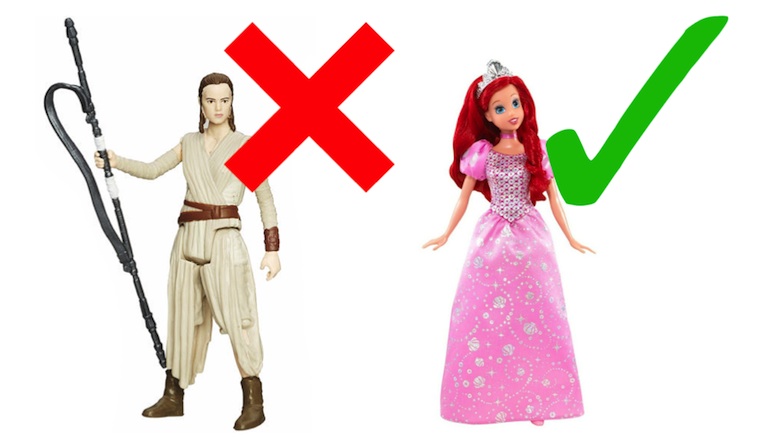 [Pawtucket, RI] Toymaker Hasbro, Inc. (HAS) is under fire for its selection of toys related to the new Star Wars movie, The Force Awakens, in which the female lead, Rey, is vastly under-represented. Their Star-Wars-themed monopoly game doesn’t even feature her among the four characters, which are male newcomer Finn, be-penised villain Kylo Ren, Luke Skywalker, and Darth Vader – who only appears in the film in the form of a crumpled mask.

But Hasbro insist this is for the best of reasons, as they didn’t want to spoil the surprise that a female character could be a major protagonist in the story and not just a romantic sidekick to the highly acknowledged male lead.

“We didn’t want to be the ones to spoil the joyous discovery by the girls in the audience that someone of their sex could have real agency.”

Such is Hasbro’s altruistic determination not to spoil the revelation that women are the equal of men in society that they have undertaken to review all of their products offerings.

“Childhood is a precious time when you can hold wonderful notions like that your dolls must have the exact same skin tone as you, or that only boys can play doctor and girls must play nurses who flatter them as they care for the patients.”

They point to the fact that the United States has never had a female Commander-in-Chief, though that could happen some day, maybe sooner than later.

“Hopefully it will be a nice surprise for girls to find out that, yes, a woman can be President. We’d hate to spoil that beforehand by selling them toys showing females in any kind of position of authority.”

“Nerf guns require a certain spatial intelligence to fully appreciate them, so we don’t want to spoil the surprise that girls can possess that as well as boys. It’s much better that they learn that in middle school or high school, long after they’ve slipped behind their male peers in their STEM ambitions.”

Initial fears in Hasbro’s investor relations department that this would drastically affect the company’s stock price proved to be unfounded.

“Turns out our entire inventory of girl-focused toys that were not princess- or caregiver-related didn’t amount to much at all.”