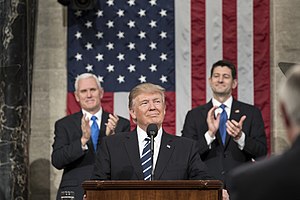 In yet another first, the White House has announced that this year’s State of the Union address by President Trump will be exclusively available on Pay-Per-View.

“For those who don’t know what that is, it’s the same service you watched the Mayweather v McGregor fight on.”

The idea came from the President himself, who said giving the show away for nothing to the fake news networks was a ‘very very bad deal’.

Instead, the ‘State of the Union 2018 Extravaganza’ will be available on Pay-Per-View at a cost of $39.99 for personal viewing, with tiered pricing available for commercial uses.

Those who want the best experience can attend the SOTU Blowout Bash at Mar-a-Lago for $100,000, which will feature a personal appearance by Trump himself later into the night as he will be making his way directly there on Air Force One after the address concludes.