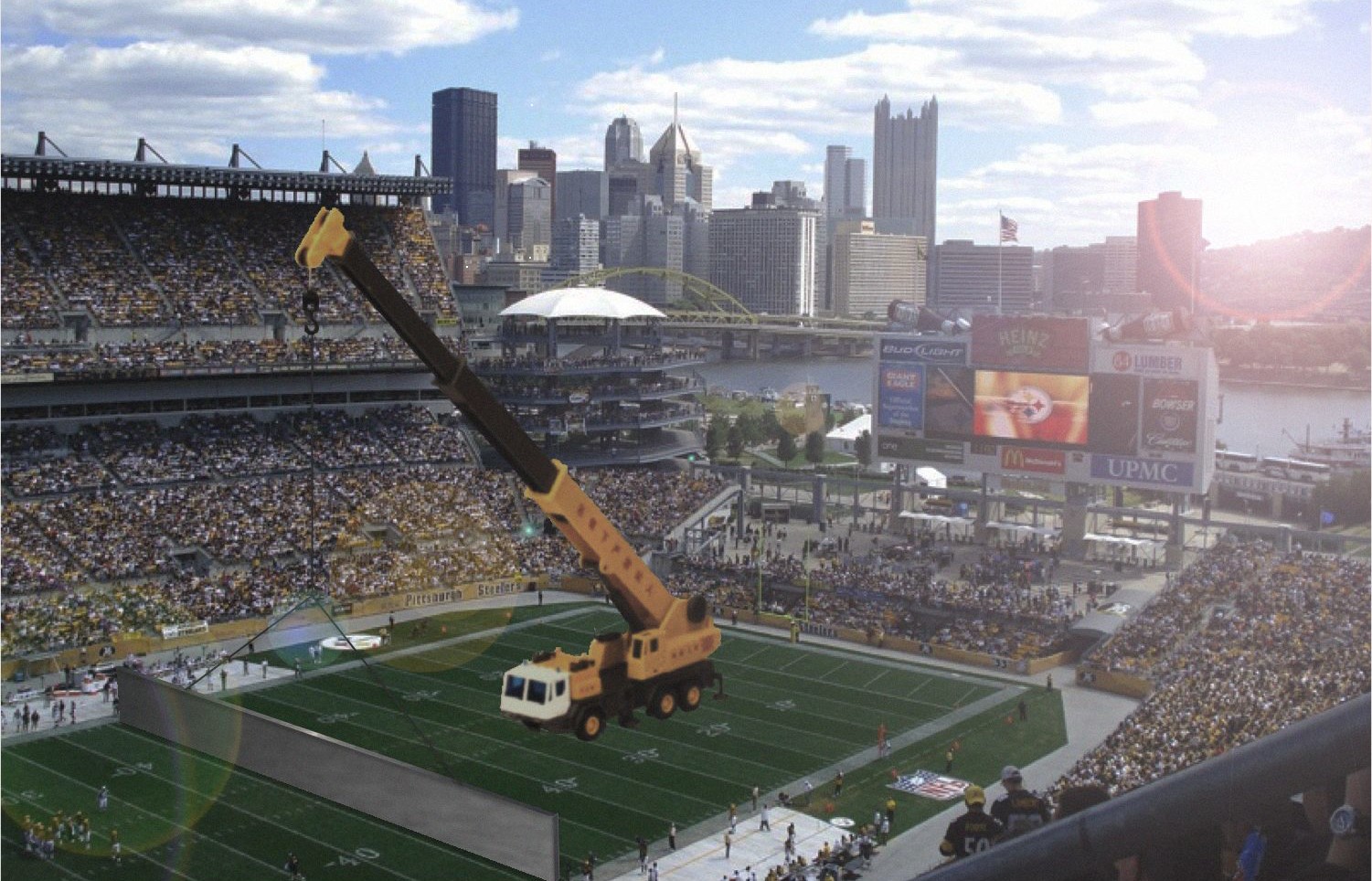 With their postseason now over, the Black and Gold army is already looking forward to 2015, encouraged by quarterback Ben Roethlisberger’s remarkable ability to put points on the board for the Steelers. Unfortunately, given his fondness for throwing interceptions, Big Ben is equally adept at racking up the opposition’s score, making defense more important than ever. That could only mean one thing in Pittsburgh – it was time for a new Steel Curtain.

A quick review of the NFL rulebook uncovered no explicit prohibition against consolidating the entire defense into a large metal structure, which was enough for the Rooney family to sanction the unorthodox trade. The 10 foot high by 160 foot wide solid barrier arrived by barge at Heinz Field, and the organization has not looked back since.

The new defensive line, which is moved into position by means of a telescopic boom crane before each down, is blocking forward movement even better than Joe Greene and company used to do, though its sack record remains less than satisfactory. Head coach Mike Tomlin was characteristically enthusiastic:

“It’s my hope that someday people will look back at this current defensive line and think ‘Steel Curtain’, and not just because it technically is an actual curtain of sorts that so happens to be fashioned out of steel.”

But what about the locker room? Will the new Steel Curtain cause problems like LeGarrette Blount did before his release last season? Not according to Black and Gold veteran Troy Polamalu:

“We were all upset by LeGarrette’s trash talking and attitude, so it will refreshing to have a presence in the locker room that’s more restrained.”

But when pushed, the hair-blessed strong safety admitted that making a personal connection has not been so easy. “This new Steel Curtain is actually pretty damn cold,” confessed Polamalu, “I asked it if it wanted to try out this new Sushi place on the Southside, and it just kinda stared me down. But as long as it stays respectful and gets the job done on the field, I guess that’s what matters at the end of the day.”

Will there be further changes in the Steeler camp? Rumors that Big Ben is to be replaced by a military-grade precision mortar were quickly quashed, though when the subject of injury-prone running back Le’Veon Bell came up, there was a telling silence. “You didn’t hear this from me,” whispered someone in the shadows who was obviously outgoing defensive coordinator Dick LeBeau, “but Le’Veon is gonna be replaced with a bus, most likely of the yellow variety that is customarily seen ferrying schoolchildren around.”