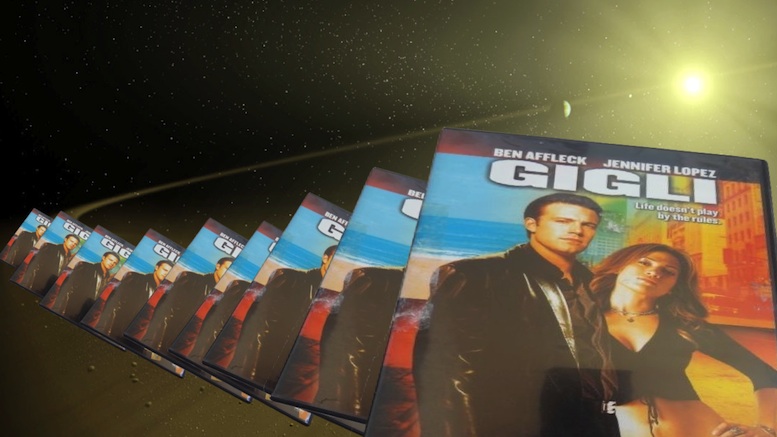 The suspected Alien Megastructure surrounding star KIC 8462852 has been revealed to be of human origin. The unusual lights fluctuations are due to a huge number of unwanted DVDs of the 2003 flop movie Gigli in orbit around the distant star, according to the distributor responsible for their disposal.

“Usually when there’s a movie or video game that’s a dud, the many millions of copies are buried in a coal mine or sealed under concrete, as happened with failed Atari game ‘ET’ in the 1980s.”

But in this case they wanted to make sure there was no chance of their awful product resurfacing, so the decision was taken to fire all known copies into space. It was after reading about the unusual findings by the Kepler Space Telescope that executives at Columbia Pictures put two and two together.

“KIC 8462852 – that would be the direction we fired them in, alright. They must have been captured by its gravitational pull and settled into orbit.”

What this means is that the unusual light patterns do not imply an alien presence. It does not rule it out either, so it’s still possible there are lifeforms there.

“By God I hope not – because they might watch Gigli and think it’s representative of our movies. Perhaps we should launch a copy of The Social Network to prove not everything we produce is unwatchable dreck.”

The explanation confused scientists, as, even if the DVDs were going at the speed of light, it would still have taken them 1500 years to get there. But Columbia Pictures insist they found a way to break the light barrier in the interests of getting as much distance between Earth and Gigli as quickly as possible.

“The normal rules of physics simply don’t apply when it comes to a movie this atrocious.”