What: Not Medea by Allison Gregory

Where: Off The Wall Productions at Carnegie Stage (Carnegie)

When: Through October 19th

Quick verdict:  Prepare to be devastated (in a good way)

Since we at Breaking Burgh are classically trained in the art of looking things up on the internet (seriously – we’ve used Lycos, AltaVista, and Lynx) we can inform you, Dear Reader, that original mentions of Medea had her killing her children accidentally. Somewhere along the way, someone (a playwright naturally) had her doing so out of rage and vengeance instead and it stuck. Seems those ancients were hankering for Jerry Springer melodrama as much as us moderns. We can’t say for sure that this is the only Medea play that touches on this (there are a lot of Medea plays including one written by a Auschwitz victim while imprisoned in Theresienstadt – talk about tragedy) but Not Medea by Allison Gregory is a damn good one.

We won’t spoil the opening because it’s fun but we will say that the main character (Drew Leigh Williams) tackles the differing versions of the Medea myth hands on. It is a command performance and she nails the early jokes with ease (yes there are jokes). Some of the most straight-up entertaining moments come from Medea’s interactions with her husband, fleece fetishist and major male privilege beneficary Jason. Allan Snyder goes to town with the role and it’s a treat. He can’t gaslight the street-smart (dirt-path-smart?) Medea but he manages to do something arguably worse – he gaslights himself into believing his own bullshit so completely he makes you want to kill some kids just to knock him off his pedestal. His cheerful confidence as he declares for the umpteenth time how he just wants to help by carrying the burden of screwing a Royal is delightfully infuriating. Elizabeth Boyke does sterling work as the Chorus and a nice turn playing a child with the unburdened glee adulthood forsakes. It  is directed by Allison Weakland who makes good use of the space to play up the central conceit. 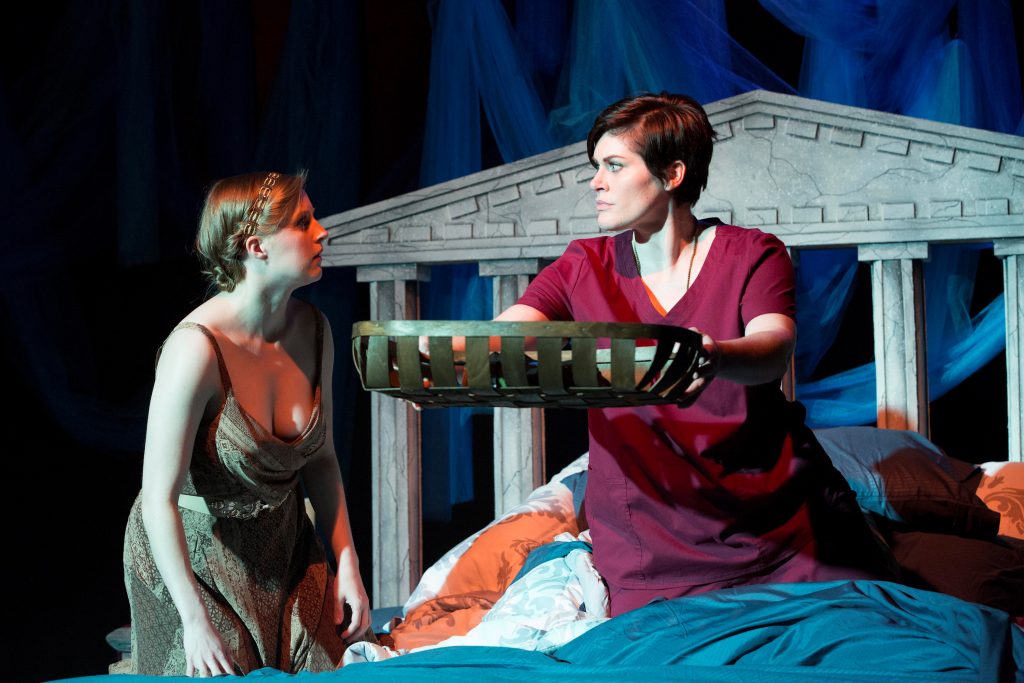 Medea duly does the evil deed and it’s cause for extended displays of agony. But it’s a feint and here is where Not Medea reaches a higher plane. Perhaps that long dead playwright was doing us a kindness by serving up a story of monstrous depravity knowing the thing we really fear is the lifetime of pain a careless moment can engender.

Not Medea is playing at Carnegie Stage through Saturday October 19th. Tickets are available here.

Be the first to comment on "Theatre Review: Feeling Very #MedeaNotMedea In Carnegie"