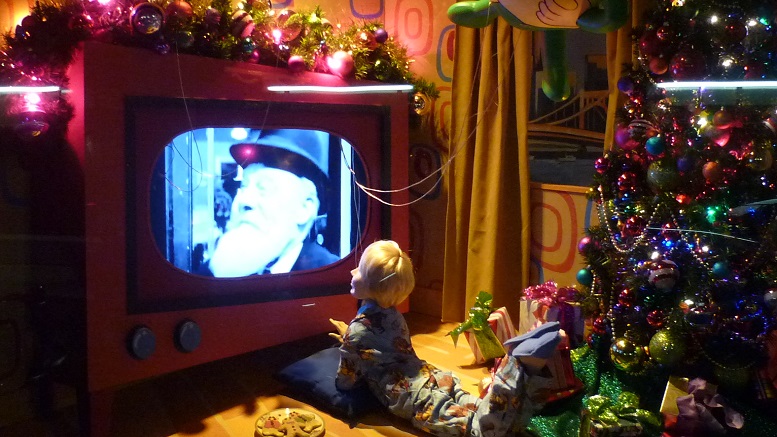 When: Through December 22nd

Quick verdict: A Good Time Will Be Had By All

Let’s face it – when we tell you that this is an old-time Christmas variety show with lots of song, some dance, and a juggler to boot you are either all ‘I’m there – where do I book tickets raht nawh?’ or ‘That’s not my cup of tea at all and anyway I’m busy that night’ (you scrooge you!). But for those in the middle we can report that this ‘live’ Christmas Special delivers as promised with a full hour (actually 70 minutes) of Rick Sebak in his ‘living room’ welcoming local guests of great talent. In fact the Public might have done better playing this up as it was not 100% clear by the title or the pre-publicity that this would be the case.

The format is like an old time variety show with Seback there the whole time complete with the requisite door that everyone knocks on. Actually pianist and sidekick Nick Stamatakis is there longer as he both plays during the preshow and as you leave. The first guest is Lenora Nemetz who knows how to kick things off and who is the most animated by a mile as you’d expect from her Broadway resume. Then comes jazz legend Etta Cox who delights as we knew she would having had the joy of seeing her own the old James Street tavern on the Northside. The structure of the show becomes more clear as Sebak counts down his list of his ten favorite Christmassy things about Pittsburgh. These get more and more interesting and obscure as the show progresses. Brief clips from some of his specials are another welcome guest. Sebak is at his strongest when earnestly relating something you didn’t know – or forgot you knew – about this place we live in. Like Misters Rogers, Sebak instinctively understands how to inspire a sense of wonderment in an audience, whatever their age.

We were most pleased by an appearance by Josh Verbanets, though it seemed that a good deal of the audience was not too familiar with him as they are presumably not up on their Pittsburgh indie rock. Verbanets, among other things, is the frontman of formidable local band Meeting of Important People and he does an exquisite solo of a Kinks Christmas number on his first appearance. His subsequent interactions with Sebak work very well and it’s clear he is a natural all-round entertainer who thrives beyond just ploughing through a setlist.

Added to this are an amazing child opera singer, Victory Brinker, who’ll remind you how little you accomplished by age 7 – or now for that matter – and a very entertaining comic juggler, O’Ryan Arrowroot, who proves most useful towards the end. Though the banter sections are at a disadvantage when compared with the intimacy of TV, the live performances are excellent, though Ben Prisbylla’s ukulele was hard to discern at times. Sebak’s ‘list’ includes the Christmas window displays of downtown department stores past (i.e. all of them), a fascinating recounting of Charles Dickens’ visit to the Burgh, and the origins of the classic carol ‘We Three Kings’. Sebak relates how he always supposed it was a medievel thing (and in hindsight so would we) but it actually has a (somewhat) more contemporary Pittsburgh connection. The rendition of it by Stamatakis, Verbanets, & Prisbylla is very nice indeed – though if they should ever form a band or a law firm they can look forward to many many misspellings.

All in all Yinzer Yuletide accomplishes exactly what it sets out to do and features some very strong performances and a few turns you might not expect.

Be the first to comment on "Theatre Review: It’s Christmas Variety Hour With Rick Sebak At The PPT"