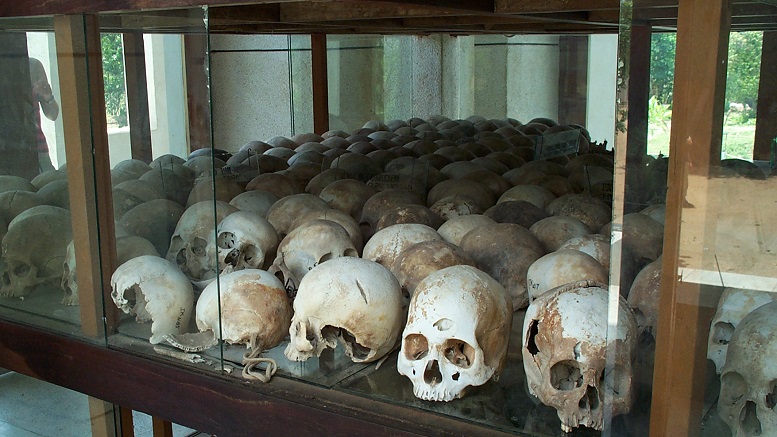 What: Cambodian Rock Band by Lauren Yee featuring the music of Dengue Fever

When: Through October 6th

Quick verdict: You will be entertained and more

When was the last time you saw a big pile of skulls? If you’re a regular follower of Breaking Burgh it was probably during the political attack ad targeting AOC that aired during the Democratic Debate – for shame ABC! But it’s clear what the people behind that deplorable TV spot were up to by equating socialism with a skull-scape. Groups of skulls sans skin spell trouble, and one political group of the later 20th century owned big-pile-of-skulls imagery. We show you a large belching chimney or a mountain of worn shoes and your mind immediately goes to Nazis. But a skull fest? That’s the calling card of the Khmer Rouge.

Fortunately for this reviewer, the most recent time we saw a pile of skulls was at Cambodian Rock Band, playing at the City Theatre through Sunday October 6th. Turns out just before Cambodia gained an unfortunate monopoly on the phrase ‘Killing Fields’ in the mid 1970s it had quite the rock music scene. Playwright Lauren Yee has crafted a mostly captivating two hours that features songs by current Los Angeles/Cambodian rock band Dengue Fever (and an okay piece by some guy called Bob). This isn’t some gimmick – music is the backbone to the story. A conventional musical this is not. There is admittedly an over-reliance on coincidence in the plot that is not helped by the characters remarking on it. But the rewards of this play are too great to allow that flaw to gnaw for long.

It opens with an upbeat number followed by one more brooding to set the mood. Then your charming host gives a brief history of Cambodia replete with said skull imagery. History was never so much fun – or horrific! After that it’s your basic awkward family dynamic for a while – embarrassing dad turning up where his daughter works to discover her secret boyfriend, only with the trial of one of Cambodia’s most terrifying figures, Comrade Duch, as the backdrop. Modern Family with genocide!

The performances are very good to excellent, but special mention has to be made of Greg Wanatabe playing Dad (Chum) on whom much of the heavy lifting falls. The way he struts around with his dorky rucksack is a joy to behold – you know this guy, or you think you do. His role is rich and funny and he gets some of the biggest laughs, many at the expense of ‘the Thai’. But despite the fullness of the dad role, it is Comrade Duch (Albert Park) who ultimately treatens to burrow his way deep inside your skull. This is underlined by a structural choice made by the playwright (involving a minor spoiler that comes early on which we won’t reveal). That choice is not wrong, but it is revealing of ourselves, and makes a point more relevant to the present time than those depicted.

The truth is that we all love to be entertained and we all love a villian – until that villian turns on us. Though if the villian is entertaining enough, we probably won’t notice until it’s too late.

Be the first to comment on "Theatre Review: Skeletons in the closet and everywhere else in Cambodian Rock Band"